Preview: The Journey, by Gianna Bruno 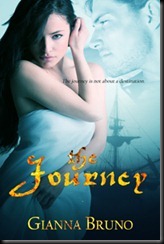 They don't hang witches in Salem anymore, but Milena's punishment is being shunned. When her lover Thomas' ship is lost at sea, she fears he perished with the rest of the crew leaving her alone in a town bracing for a war over slavery, but still rife with an older form of prejudice.

Milena travels into the Forest and Sea Otherworlds to search for him, paying the fairies for her passage with bodily pleasures. Circe, the evil mermaid holding Thomas hostage, demands even more. She faces off against Circe in her underwater lair, endures the wrath of a colony of escaped slaves, and learns the terrible truth of what led to the shipwreck that left Thomas as its only survivor.

On the long journey, Milena learns to use her powers in ways she never imagined and discovers surprising truths about her own past. Left questioning everything she has ever believed, she must make the choice whether to return home with Thomas or stay in the Otherworlds forever.

“The journey is not about the destination, but rather overcoming the obstacles along the way.”

So says the tag for Gianna Bruno’s new novella, ‘The Journey’, which will be released by Eternal Press on 7 December. The story is about more than destinations or obstacles, though. It is about a woman who will do anything, and go anywhere for the man she loves. As such, it is very much a story about an impressively drawn character.

Milena’s lover Thomas is lost as sea shortly before the War Between the States. ‘The Journey’ follows Milena’s quest to find her love and takes her over much of the US’s eastern seaboard and beyond – so far beyond, in fact, that her travels take her to the Otherworld itself.

The plot is well thought through, and enough to keep the reader gripped on its own. The story’s highlight, though – as with Gianna’s previous Eternal Press release, ‘Hot Chocolate Kiss’ – is the strength of the main character. Milena is totally committed to her man. Not in any wimpish way, but with the sort of love and passion that makes her a strong heroine.

It might have been easier to have written this as an adventure story. Gianna shows everything through Milena’s eyes, which gives the tale an additional strength. Throughout, the reader wants to know what will happen to Milena, and whether she will ever live happily ever after with Thomas.

The story begins just before the outbreak of the American Civil war, and in particular highlights the misery of the slave trade. The prejudices and beliefs of the time are well illustrated, in particular, the villagers’ attitude toward Milena – a witch. The heroine’s sense of desolation at being shunned at a time when her man is missing, and she most needs a friendly face, is soon magnified by the plight of escaped slaves she meets.

Even to one unfamiliar with the period Gianna writes with a confidence that assures the reader of its historical accuracy.

In all, this was an entertaining and thought-provoking read.

And, finally, Gianna will be giving away a copy of ‘The Journey’ to one reader who leaves a comment below.

Posted by Andrew Richardson at 07:26