As my readers will know, I write a lot of fiction set in the Celtic past.  I also get a buzz from reading other 'Celtic' books, like those by Mary Stewart and Morgan Llywelyn.

Celtic history and myth have been lifelong interests.  I fell in love with Celtic stories when I was very young, so it's not surprising their lives, history and legends play a major part in my fiction.

There are some aspects of Celtic life, though, that I find easier to put on the page than others. 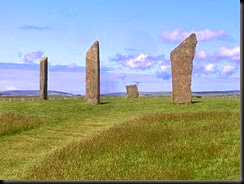 My degree was in history and archaeology, and I concentrated on the Celts as much as I could.  I was very fortunate that my archaeology tutor was a specialist in post-Roman Celtic Ireland, and she was brilliant at explaining the context of finds.  That means I don't have much trouble describing Celtic buildings, tools, clothing, stone circles (I know that the latter are earlier than the Celtic period, but as I’ve got a picture…) and the like.  In short, I'm happy writing about the 'physical' side of Celtic life.

The history part of my degree also means I know what was going on at the time and place I set my stories in - for example, which tribes were most powerful, how much the Roman Empire was an influence, and who was at war (or peace) or trading with who.

So, I'm fortunate enough to think I know enough about the subject to be able to write about people's day-to-day life with some confidence.

I didn't study Celtic myths and legends at university, but the stories – both Welsh and Irish - have fascinated me since I was a child and I know them well.  Studying the Celts helped me here because it helped me put the stories in their historical context.  As a lot of what I write is based around the myths, that's extremely useful.

There is one aspect of Celtic life, though, that my background doesn't help with much.  That's culture and attitudes.  So, I struggle with the notion of 'might is right', for example.  I think warlords and their warriors must have been similar to slightly older playground bullies or football hooligans.  I don't 'get' that sort of culture or mentality, and I'd be the first to admit I find it difficult to pull myself away from modern values to make my characters think like Celts.

There must have been openings in ancient society for those who weren't warlike - bards and priests and craftsmen come to mind.  I don't think it's any coincidence that my main characters aren't usually warriors.  My stereotypical Celtic character will be a downtrodden slave girl - or at least someone from the lower classes, such as Breena, in 'The Doe and the Dragon'.

Another Celtic character type I use is what I call 'the reluctant hero - a man who is an administrator rather than a warrior but finds himself in a position where he has to fight to avoid losing face, and has to deal with the resulting inner conflicts.  Gilfaethwy, my hero in my forthcoming 'Footholder' is one such character.

So, I've worked out that while I find it difficult to relate to the mores  of Celtic society, I've discovered ways around it.  In fact, I've found it can be an advantage as it brings an extra dimension to my Celtic-based stories.

Posted by Andrew Richardson at 07:25