I’d like to welcome author Jeffery J Smith to talk about his book, ‘Perfect Timing’, published by Rogue Phoenix Press.  During this book tour, Jeffery will award a digital copy of Perfect Timing to a randomly drawn winner via rafflecopter during the tour. 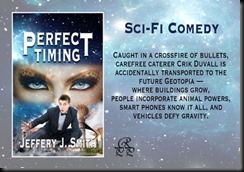 Accidentally sucked from the present, caterer Crik must prove he started the trend that led to the future’s utopia—or be returned to waiting bullets. 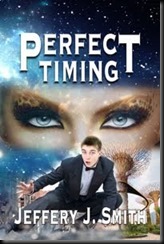 Accidentally transported to the future, caterer Crik escapes house-arrest with Tepper, his possible distant descendant. While pursued by volunteer vigilante Voltak, goofball Crik explores Geotopia—where buildings grow, people incorporate animal powers, smart phones know it all, and vehicles defy gravity—seeking clues. If he can discover, understand, and articulate the future’s public policy that works right for everybody, he can prove he was their founder, the lone agent of change who put society on its path toward universal prosperity and harmony with nature. If he fails to convince the Futurite Authorities, they wouldn’t return their unexpected visitor to the exact second he left—something their law requires—to the moment when a hail of gunfire was bearing down on the luckless caterer and college dropout...would they?

The image of a bellhop perches first on one leg then the other by the edge of a roof of a downtown skyscraper. Gazing downward, with both hands he raises a golf club over his head. The scene occurs on a large monitor.

Far below, the people look like a school of minnows flitting across the downtown central plaza. Others resemble tufts of beach grass clumped around street performers break dancing or juggling. The bellhop arches his back.

"This is your candidate?" the taller researcher says. "This golfer? Crik Duvall?"

The shorter one nods. "He's a bellhop, too."

At the wall atop the city's tallest hotel, Crik in the hotel's uniform lowers his club. The height does not frighten him, rather, the view always intrigues him. People sure look little, Crik thinks. Must be how landlords see us.

Crik takes a few practice swings. He steps back from the edge and tees up. He drives a Whiffle golf ball into the air without a hitch. The headwind blows the hollow ball back to him. He catches it. Yes! He replaces the plastic ball on the tee — yo-yo golf.

Lifting his bellhop cap, Crik runs his fingers through bleached streaks. Yo-yo golf will challenge enthusiasts of all nations, even become an Olympic event. I could pay down my tuition. Even help Randy with his debt. How dumb, messing with dudes from the vodka importers convention. What'd he know about ostrich racing anyway?

Crik's knuckles are tattooed with esoteric symbols. A stud twinkles in one ear but no weighty choker worries his swing. He's up to twenty-three straight successful drives-then-catches, closing in on his personal best.

The word "Fore!" rings out from a phone in his pocket, but he ignores it.

Steadying himself, Crik cocks his club for another swing and drives the white ball into the onrushing breeze.

Crik blinks. The plastic dot sails past him, into the void. Zippers.

"Whenever you don't answer your phone, I know where to find you."

Crik looks over his shoulder, resting the club on his other one.

Randy lets the door close behind him. "My man, break be over." Also a bellhop, Randy has his cap is on backwards. As he crosses the roof, his body lags behind his head, his neck nearly level.

Like offering his empty melon to a guillotine, poor sucker. Crik takes out a twenty-dollar bill. "Another big date before next payday, bro?"

"Man, you are like family." Randy takes the note.

No, Crik was named Crik because Brook was already taken; his older brother got named that.

"Oh, I get it," the hotel manager said when interviewing Crik, "Creek."

Crik nodded. His hair waved, didn't curl, despite him being the black sheep of the family. "Yeah, Crik."

Crik is too busy to finish college. How many decades would it take to pay off the student loan — a necklace of stone — anyway? Especially with good friends unable to budget themselves. Better to have a fun job. Make money and enjoy life.

In the gloomy laboratory, tall Dr. Alvin Ultra and his short assistant Yuri Ivanov, both middle-aged, emit gasps and wag their heads, jotting down notes.

The monitor, thin as a sheet, hangs from a ceiling in a high corner. It's cabled to a device shaped like an oversized dog biscuit with a sharp point like a syringe, big as a sled, some parts shiny, some opaque. Colored wires twist and run to other odd-shaped devices that whir and jerk.

Crik hides his club on the ledge beyond the perimeter wall.

Dr. Ultra glances at Yuri. "Neither of these two has indicated any interest in social evolution, never mind founding an entirely new way of viewing the world."

Under his beret and bushy eyebrows, Yuri shrugs. "Destinon said to check out this moment."

The two bellhops enter the hotel's darkened conference hall. It's packed like a tent revival on the eve of the Second Coming. Of course. Who hates money?

Strains of Wagner's majestic movements accompany the big-screen video of unabashed luxury: Acres of vineyards remind Crik of the south of France where he'd backpacked one summer. A sleek car barely looking street-legal swerves through hills.

On the screen, a limousine grand enough for comfortably hosting small celebrations sits in the driveway of a mansion with the long lines of Frank Lloyd Wright draped over a seaside cliff. Inside, fashion models adorned with jewelry befriend vain hosts sipping champagne. Famous paintings hang on the walls.

Crik leans over to his pal. "I've a print of that Van Gogh."

"With his autograph?" Randy whispers.

Crik frowns. "Ethics teaches us virtue is its own reward."

Randy frowns. "Economics teaches that reward is its own virtue."

My reward would be to never get another bill, late notice, or harassing phone call.

A sharp-dressed salesman in a flawless Armani suit strides onstage. His shiny hair neatly styled, Julian Seizure keeps his posture erect and full-chested, as would a cocksure general before his troops. His blistering smile stretches his narrow-featured face.

Seizure fires his words forcefully and pounds the air with a fist, keeping time with his avarice. "Andrew Carnegie, a billionaire back when a dime bought you a complete breakfast, noted, and I quote: 'It takes hard work to amass a fortune in industry, but any fool can get rich in real estate.'"

Perking up, Randy whispers to Crik, "Did he say any fool?" His eyebrows bounce up and down.

The big screen shows slender beauties gliding in Olympic-size pools and robust businessmen driving golf balls a mile down the links. The pitchman exhales. "The old boy nailed it. Nothing else comes close to how much people pay over the course of their lives for a place to live. Directly or indirectly, a big part of everyone's spending goes to a lease or mortgage."

The sea of heads nod in assent. The speaker opens his hands in empathy. "Since all of us have been foolish at least once …"

Amid the sea of heads, only Randy bobs agreeably — until he sees nobody else owning up and slinks lower into his seat.

"Why are we not all very well off?" The instant-riches guru taps his skull. "Foresight." Seizure stares down his audience. "It's not speculation when you see what's coming."

Crik snorts. Too good to be true. "Why can't telling the unvarnished truth work to sell?"

Jeffery J. Smith’s credits are in nonfiction, being published in both the popular and academic press on “geonomics” (ecological economics). Before switching to fiction, he edited the news site, the Progress Report and contributed regularly to TruthOut. His newsletter, The Geonomist, won a California Greenlight Award. He taught both English and composition and was a graduate scholar in linguistics. An inventor of games and engines, he lives on the West Coast and winters in Latin America, listening to tall tales.

Posted by Andrew Richardson at 16:45