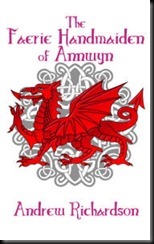 It’s now confirmed; ‘The Faerie Handmaiden of Annwyn’ will be released on World Cup final day, 15 July.  The book is already available for pre-order at Amazon, at the link above.

Dancing with her friends in the mortal realm, Penni, the fairest Tylwyth Teg, has no idea of what she will unleash by disobeying the law. A mortal attacks the handmaidens and blocks Penni’s return to Annwyn.

Banished for breaking the law, Penni is forced to take refuge with Pelling, a mortal, and his family. Penni and Pelling find love and marry, despite his brother’s hatred of the fairy folk. He wants to sell her – Tylwyth Teg slaves fetch a princely price, a great temptation for a poor farmer. The couple moves to the capital of sixth century Wales where King Maelgyn rules. Subjected to prejudice and cruelty, they are trapped in the bitter struggle between Christianity and the Old Ways of paganism. Can their love surmount the differences in cultures and religion?

Andrew Richardson, author of The Footholder's Tale and The Door into War, brings to life the classic legends of the Tylwyth Teg and King Maelgyn, weaving the mystical beliefs of the period with the timeless myths.

Posted by Andrew Richardson at 18:06