I was in north Wales earlier in the month for a really enjoyable long weekend.  We got out in the mountains and did several walks, some familiar and one new.

As my ‘horde’ of fans will know, much of what I write is set in our Celtic past.  Often this is in north Wales – an area I know well.  I’ve never really thought about how my characters get about, but this month’s break set me thinking about the problems of moving from place to place.

I suppose I’ve always taken travel for granted in my historical fiction, largely because I’m so used to jumping in a car or walking prepared paths.  I also come from the south of England, where the ground is often well drained, and travel on gentle hills straightforward.  It’s never been an issue I’ve had to think about. 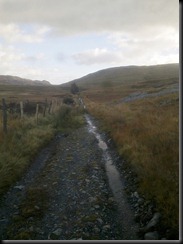 This time, we did the stunning Roman road between Capel Curig and Llyn Ogwyn.  The picture on the left doesn’t really do it justice because it doesn’t show the mountains rising on both sides.

(As an aside, the archaeologist hiding inside me was chuffed to spot the physical features that marked the path as a Roman road - and not just its straightness – before I found out it was Roman.) 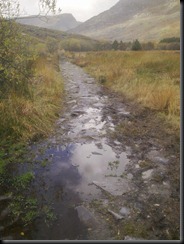 Sadly, though, it wasn’t a straightforward walk.  Although the path usually avoided marshes and crags, in places the route was barely passable – as you can see in the picture to the left.

That set me thinking about how difficult travel must have been in north Wales, especially where there aren’t good paths.  The ground is peat that keeps moisture and forms treacherous bogs.  It would have been very difficult for much of the year.  Travel above the valley floors isn’t a viable alternative because the mountains are rugged and difficult.  Strangers would need either luck or guides to get them along a valley.  Movement at night would be almost impossible.

My characters will certainly be more careful in getting around the country in future!

Posted by Andrew Richardson at 06:49 No comments:

(Or, to give it it’s full name, National Novel Writing Month.)

I hadn’t quite forgotten that November is NaNoWriMo.  The aim is to write a novel (or, at least 50,000 words) during November.  I want to wish everyone entering good luck, and I hope you all succeed.

I have full respect for anyone taking up the challenge.

I’m not giving it a go, partly because I don’t have a well enough defined project to work on.

My other reason for not being involved is that for me, one of the pleasures of writing is the variety of tasks involved.  Off the top of my head I can think of:

So, that’s a lot of things for the average writer to do.  Much as I enjoy the craft, I think concentrating on one aspect for a month would be repetitive and I’d fear I’d fall by the wayside.  So, that’s why I respect everyone making the effort.

I am seriously thinking of giving it a go next year.  One of the downsides of writing novels is that I have more ideas than I have time to do anything about them.  If I can get the detailed planning done beforehand, it might be the impetus I need to work on something that might not otherwise see the light of day.

The main downside will be the copious redrafting of what is likely to be a very poor first draft!

Posted by Andrew Richardson at 11:24 No comments:

I wondered recently how much time I spend writing.  It’s my main activity outside work, so I expected it to be quite a while.

My wife works shifts – often whole weekends including sleep-ins - and Junior is a teenager so has his own life.  That means I often get the house to myself for hours at a time.  I also do much of my proof reading on hardcopy in the living room with wife and child around.

So, I don’t think writing particularly keeps me away from being with the family.  Certainly not as much as spending evenings in the pub would, anyway!

For the last couple of weeks I’ve timed myself.  I’m staggered to realise my writing activities take about fifteen hours a week!  That, of course, is about two working days.

I average around an hour each evening after work, and five hours a day at weekends.  That’s assuming nothing else comes up – obviously, if we spend a Saturday or Sunday visiting relatives that’s a chunk out of my fifteen hours.

So, what do I do in that time?

Well, I haven’t timed each activity, but the various tasks include, in approximate order of time taken:

Even with fifteen hours a week devoted to writing I don’t run out of things to do.

Is there anything I’d like to do a lot more of?  Yes.  Researching remote, rugged locations hidden away in the north Welsh mountains –preferably near a pub!  Fortunately we were there at the weekend for a break, in a cosy little cottage on the outskirts of Rhyd Ddu in Snowdon’s foothills, then on to a hotel in Capel Curig for a night.  It was great!

Posted by Andrew Richardson at 19:00 No comments:

Fellow writer Neil Evans has written a review of The Well. Thank you Neil for reading the story and taking the time to write about it.

Posted by Andrew Richardson at 21:21 No comments:

I’ve known Philip McCormac for many years, since we met in a pre-internet horror writers’ critique group.

The group folded but Phil remains a family friend. In days gone by my son almost worshipped Phil not only for his sense of humour, but for his inability to pass an ice cream shop without making a purchase!

Phil has written many westerns under a variety of pen names, as well as thrillers and an American Civil War novel.

His latest novel - Bridge of Blood – explores yet another area - contemporary Northern Ireland. So, what was it that drove Phil to write his latest novel?

Here’s what he told me when I asked:

I got my first writing successes with short horror stories so I am pleased to be associated with Greyhart and grateful to them for publishing my supernatural horror novel BRIDGE OF BLOOD and taking me back to my roots.

The incident of the slaughter on the bridge over the River Bann at Portadown is an historical fact. In 1641 there was a rebellion in Ireland against the English settlers and many atrocities were committed on both sides. The story intrigued me and it was while reading accounts of the massacre that the idea of a novel began to take place.

The times were savage and we look back and shudder to think of the barbarity of the age. But consider our own time. The Balkans, the Middle East and Rwanda in Africa to mention but a few - the fighting and slaughter go on and on. Nothing much has changed. I suddenly thought: what drives people to commit such violent acts?

What if there was a malevolent presence spitefully pervading peoples’ minds and making them act in such a manner? So I selected one such demon from amongst the profusion of these supernatural beings – Laldaboth. [For your own curiosity Google him]. It’s there all right and maybe watching you right now. I advise you not to encourage it too much.

I introduce this demon in the prologue where he is inciting the rebels to commit atrocities against their captives. It is imprisoned by a priest in a holy vessel called a ciborium. We move into the present day where a set of circumstances lead to the release of Laldaboth. Gleefully it sets about creating mischief and mayhem.

Bridge of Blood is available from Grayhart Press.

Posted by Andrew Richardson at 16:18 No comments: