‘The Faerie Handmaiden of Annwyn’ Released 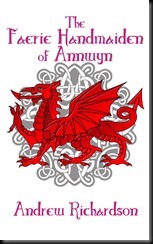 At last, after years planning, writing, and editing, ‘The Faerie Handmaiden of Annwyn’ is released.  As a reminder, it’s a novel based around a traditional north Welsh story of a man who married a Tylwyth Teg (Welsh for fairy) and the trials their love goes through.  I’ve set it against the backdrop of King Maelgwn, a colourful sixth century ruler figure who has always fascinated me.

As always, this wouldn’t have got into print without help and advice from loads of people:  particularly Jayne at Rebel ePublishers for taking the book on and then editing it, and those who commented on early drafts, especially Phil and Carole.

Dancing with her friends in the mortal realm, Penni, the fairest Tylwyth Teg, has no idea of what she will unleash by disobeying the law. A mortal attacks the handmaidens and blocks Penni’s return to Annwyn.
Banished for breaking the law, Penni is forced to take refuge with Pelling, a mortal, and his family. Penni and Pelling find love and marry, despite his brother’s hatred of the fairy folk. He wants to sell her – Tylwyth Teg slaves fetch a princely price, a great temptation for a poor farmer. The couple moves to the capital of sixth century Wales where King Maelgwn rules. Subjected to prejudice and cruelty, they are trapped in the bitter struggle between Christianity and the Old Ways of paganism. Can their love surmount the differences in cultures and religion?
Andrew Richardson, author of The Footholder's Tale and The Door into War, brings to life the classic legends of the Tylwyth Teg and King Maelgwn, weaving the mystical beliefs of the period with the timeless myths.
Posted by Andrew Richardson at 20:30 No comments: