Anyone who read my review of Carl Alves’ ‘Two for Eternity’ will know how much I enjoyed the story of two characters’ conflicts as they journey through history. Carl’s third novel (I seem to have missed his second!) is different in subject matter - ‘Reconquest: Mother Earth’ deals with the aftermath of an alien invasion.

I’m about half way through, and a review will follow. In the meantime, here’s a short piece from Carl outlining what drove him to write the story. 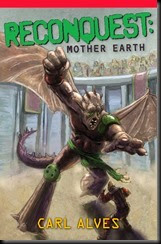 I don’t consider myself a science fiction writer. Although I will dabble in science fiction from time to time, I like to think of myself as a horror and fantasy writer. Having said that, I have always enjoyed the alien invasion concept. There have been many variations written on this topic, and I didn’t want the invasion aspect to be the main focus of the novel. In fact, the alien invasion in my novel lasts for about the first three chapters. The part I was really interested in writing about what happens after the invasion.

The post-invasion is the main focus of the novel. It combines several different factors that intrigue me. One is that the alien invasion that occurs is basically an apocalypse of humanity where most of the population gets wiped out. One of the things I wanted to explore was how people survive when civilization as they know it is destroyed. A wild card here is that the source of the apocalypse, the aliens, are still around. So not only do the survivors have to deal with rebuilding society, but there is also the element of the subjugation and enslavement of the population.

Above all else, I wanted to make this an action thriller. Even if you don’t read science fiction at all, I wanted this novel to be interesting and entertaining for that type of reader. From beginning to end there are loads of action sequence, and the novel can be read as an adventure story. My main character, Mitch Grace, an ex-SEAL, has to defy the odds in his quest to reconquer the planet from the alien invaders after waking up from a five-year-coma. I make things very difficult for Mitch and his followers and tried to keep things as realistic as possible.

Posted by Andrew Richardson at 07:04 No comments: 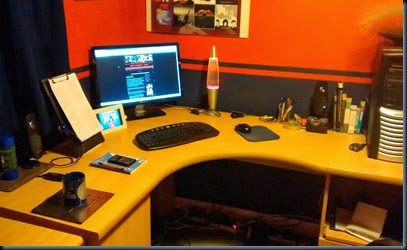 I’m always happy to mention to anyone who wants to listen (and anyone who doesn’t), that I loathe laptops.  That’s a long story and probably a subject for a different blog post.  Instead, I use a static lump of a desktop PC for writing.

Not using a laptop, of course, takes away a lot of flexibility because I can only produce in one place (my home office).  The upside of that, of course, is that I have a permanent setup, and my writing area looks exactly as I want it – even to having the home office painted in Aldershot Town Football Club’s red and blue.

So, just what does my writing area look like?  What do I have on my desk?  Well, most of it is routine, but there might be one or two surprises:

(Thank you to Peter Richardson for taking the pictures.)

Is my list about typical?  What other things do authors have in their writing area?

Posted by Andrew Richardson at 09:22 No comments:

As I’ve pointed out in this blog time after time, I love Celtic myths and legends.  I remember as a kid a TV programme called ‘Jackanory’, which had a simple format of different actors reading different stories every night.  One week really made an impression on me – they were stories of war, magic, power and lovely princesses.  These particular stories also had an added depth, subtlety and beauty that even at a tender age I knew set them far above any other tale I’d ever come across.

Too many years later I picked up a book of Welsh tales, and refound the wonderful stories that had me spellbound as a child of six or seven.

Since then, I’ve read every traditional Celtic story I can get my hands on.  it’s been really hard to narrow the list down and I’ve had to miss out a few favourites, but here are my top five.

5.  Voritgern’s tower.  According to local legend, King Vortigern had a tower in north Wales that kept collapsing.  The young Merlin told him why, and went on to mutter prophesies.  The story is set in the Gwynant Valley on Snowdon’s southern flank.  It’s a stunning place I know and love.   I hinted at this story in ‘The Doe and The Dragon’.

3.  The Ulster Cycle.  Stories set around the court of King Conchobar mac Nessa, although the ‘star’ is the Irish hero Cu Chulainn (the ‘Hound of Ulster’).  Cu’s adventures are a great read, and make him rounded by dealing with aspects such as his birth and love life as well as his prowess in war.  My favourite modern retelling is Morgan Llywelyn’s ‘On Raven’s Wing’.

2.  King Arthur needs no introduction.  I love the time and pace (post-Roman Britain) as much as the specifically Arthurian stories.  Much has, of course, been made of Arthur by medieval and later romantics, but I much prefer the earlier history and stories which retain their Dark Age feel, even if Arthur plays more of a shadowy background role.

1.  Math, Son of Mathonwy.  This stunning story is from a collection of Welsh stories known as the Mabinogion.  The unpromising premise is of a king who will die unless his foot is placed in the lap of a maiden.  Beneath that lies a story with many layers; war, power, love, rivalry, and betrayal to name just a few.  This tale has it all, and is not only my favourite Celtic story, it’s my favourite story of all time.

Posted by Andrew Richardson at 07:42 No comments:

The Pull of the Celts

Looking back at my list of titles a few days ago, it hit my just how much of my work relies on the Celts.  Most of my seven novels or novellas have Celtic links, even if they’re not set in the period.

And I’m not the only one.  The bookshelves are full of stories set in the Celtic past.  I’ve never done a comparison of periods, but I’d bet the period is one of the most popular settings for historical fiction.

First, I’ll stress that I don’t see Celtic Britain as a bygone ‘Golden Age’, like some medieval romantics (or, dare I say it, modern authors).  Life must have been unbearably hard, with harsh winters, famine, brutal lords, raids, and the like.  I wouldn’t mind visiting the past for a day or so to have a look around, but I have no wish to stay there!

I can’t speak for other writers, but I can outline the reasons I choose Celtic settings.

Posted by Andrew Richardson at 07:07 No comments: