I’d like to welcome Author Dan Ehl and his new book, ‘Jak Barley Private Inquisitor, and the Case of the Annoying Assassins’, published by Rogue Phoenix Press.  During this book tour, Dan will give away a digital copy to a lucky commenter. 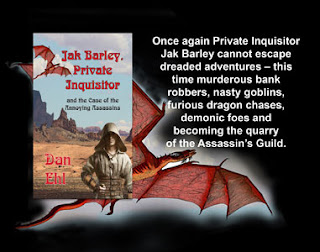 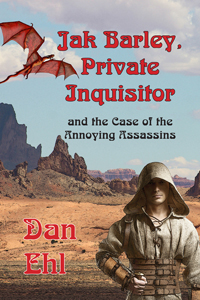 Jak Barley, Private Inquisitor, is tired of adventures and is ready to take on only hum-drum cases offering no drama–those of missing husbands, unfaithful spouses, or fat merchants paying well for outing thieving employees–anything not involving traveling, swords, or the darker magics.

Yet once again his otherworldy friend, Lorenzo Spasm, drags him into cases involving corrupt CIA (Clandestine Information Authority) agents, murderous bank robbers, nasty goblins, furious dragon chases, demonic foes, and going uncover at an elders’ RW (recreational wagon) park set atop a butte overlooking a harsh desert floor. To top it off, Jak finds himself the quarry of the Assassin’s Guild after an anonymous adversary takes out a whack contract on him.

Helping him get through this will be his intended, the beautiful witchling in training, Morgana.

“What-t-t-t?” I managed to croak in answer to the incessant hammering on my sleeping room door. I keep it bolted along with several magical wards after a number of tedious attempts upon my life by diabolical assassins, blood-thirsty necromancers, and numerous bat-turd crazy priests and neophytes of ancient and deranged deities. Other than that, my life is fairly normal.

I am back to yawn-inducing cases dealing with unfaithful spouses, stolen silverware, and runaway teensters—and I intend to keep it that way. You will not be kidnapped by piss dragons for investigating a horse theft, hounded by nasty wizards over a missing spouse case, nor forced to traipse through monster-laden wastelands to answer a simple paternity question. I now choose my private inquisitor cases wisely in my hometown of Duburoake, and again, that means no adventures. I hate adventures.

What kind of hedge-born miscreant would be trying to wake a person this early in the morn?

“Ugh-h-h,” was all my dry throat could sound. I tried opening my eyelids, but it appeared some twisted jester glued them together. I was forced to pry them apart with palsied fingers.

What had that demented lunatic been shouting last night as he kept refilling my ale mug? “There be no tomorrow.” Yes, in principle there be no tomorrow. The clock strikes midnight and it be today, with tomorrow pushed another twenty-four hours away. We all chase a tomorrow that never comes. Unfortunately, today has again arrived and it be not pleasant.

My idle thoughts were just about to lure me back into a feverish slumber when the caller again began shouting. “Jak Barley, get out of bed, you lazy ne’er-do-well sot.”

Like some pitiable prisoner coerced to climb the steps to the gallows pole, I forced myself to sit up and then fight the sudden centrifugal force that threatened to send me rolling across the room to be plastered against the wall like some youngster in a harvest carnival ride. The spinning slowly receded to where I could safely pull on my trousers, though it set off an angry outburst behind my eyeballs.
“Jak, get up, you wretched lay about.”

I lurched to the door and waved my hand across the latch, letting the ring cancel the charms placed upon it. The magical band and its wards were a gift from my betrothed, Morgana, a novice witch at the Kuu Academy of Mystical Arts and Witchcraft. Beginning at the top, I slid the five bolts over and then hesitated at the latch. I knew the grotesque vision I would see on the other side. I sighed in resignation and opened the door, there to view the huge, mocking, obnoxious, leering, and gleeful smile of my supposed friend, Lorenzo Spasm.

“Holy crap, Batman, what wizard cursed you with that aging spell?” he exclaimed.

I was used to his outlandish phrases and words because that is what they literally are—outlandish. Spasm claims to be an inhabitant of a parallel firmament, one similar to our world in many ways, but devoid of any magic. Partial proof of that claim is Spasm’s immunity to spells. Any enchantment will rebound off my friend and back onto the mage or witch who cast the curse.

“What in Hades do you want? Cannot you see I am ailing?” I managed to moan. I could not even lift my head to look in him eye-to-eye without setting off another round of thunderbolts.

Lorenzo is about six-foot, two inches, to my five-nine. I took in his droopy mustache and slightly greying hair that went to his shoulders—and the outlandish mixture of clothing reflecting his exotic wanderings. It is difficult to estimate his age, though I would guess in the late forties. He was taciturn when it came to personal details and background.

“Downed by the brown bottle flu is my guess,” Lorenzo observed with little sympathy. “You reek of a brewery.”

My answer was a glowering stare that failed to wipe away his enthusiastic demeanor. “What do you want?” I finally asked.

I slammed the door in his face and staggered back to bed. Anything Lorenzo found so enjoyable could only mean peril and hardship. I made the mistake of not locking the door and Spasm pushed it open. He crossed the room to open a window and then took a chair at the foot of the bed. 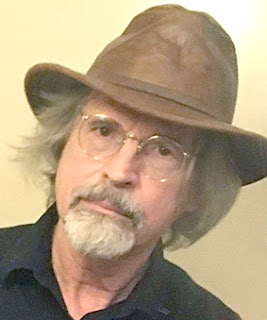 Dan Ehl has been a journalist and editor at both weeklies and daily newspapers in Iowa. The winner of numerous journalism and photo awards, including first in humor from the National Society of Newspaper Columnists, he enjoys breaking out of dryer newspaper writing to pen fantasy novels. He served in Germany as an Army photographer during the Vietnam War. “With a lot of Vietnamese people digging pits with sharpened stakes at the bottom for people just like me, I knew I wasn’t really wanted. I didn’t want to be rude and show up anyway. Being from Iowa, we always try to be polite. And Germany during the early 1970s was interesting enough with the barracks always reeking of beer, vomit and hashish every weekend.” His favorite hobbies are hitchhiking and hopping freights.