I’d like to welcome author Nancy Avery Dafoe and her new book, ‘You Enter a Room’, published by Rogue Phoenix Press.  During this book tour, Nancy will give away a digital copy to a lucky commenter. 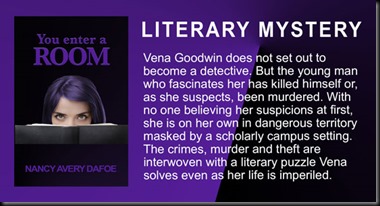 Advena Goodwin didn’t set out to become a detective. She would rather write her dissertation and fall in love, but her friend has been murdered. 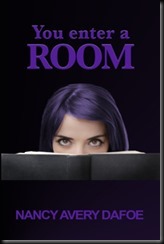 Heroine Advena (Vena) Goodwin does not set out to become a detective. She is more interested in untangling a literary mystery, writing her dissertation, and falling in love, but the young man who fascinates her has killed himself or, as she suspects, been murdered.

A smart, resilient young woman, Vena attempts to trap the clever murderer Professor Gould by using his over-sized ego against him. With no one believing her suspicions at first, she is on her own in dangerous territory masked by a scholarly campus setting.

This upmarket murder mystery takes place in the settings of Rochester in upstate New York and Rome, Italy. The crimes, murder and theft, are interwoven with a literary puzzle the protagonist solves even as her life is imperiled.

EXCERPT: You Enter a Room

“Yeah, well, they meant business, so I knew something was going down there. After circling the house, the cops pounded on the door again, then one of them looks through a window he’d already passed and returned to, standing on his toes, and yells something. The other one comes back to the front, or I guess, really a side door, and starts kicking at it. Then both of them were smashing their boots against the door. I mean, I’ve seen this kind of smash in the door on TV, but to actually see these guys break something down is damned impressive.”

Suddenly, I wanted him to slow up and not say the next part out loud, but Sam urged him on. “Then?”

“They went in, and I ran across the street like I was still jogging and looked in the open doorway because I guess I wasn’t thinking about anybody having guns, and I realize that wasn’t the smartest thing for me to do—see, I wasn’t even thinking about myself at that point.”

“Andrew!” I wanted to slap him.

“It was awful, really. This guy, he was hanging from the ceiling fixture at the top.” I covered my face and Sam gripped my arm, her painted nails digging in and leaving little impressions. “They were trying to get him down, so they didn’t see me. One cop grabbed his legs and pulled him back to the top of the stairs to check for a pulse. Then he let him go, accidentally, I think, and the guy starts swinging back and forth like a pendulum. I stepped back then because I’d never seen a dead person hanging like that, and that’s when I saw his boot at the bottom just inside the door. One of his boots was still on, but the other had fallen. I was so close that I could have picked it up. I went back to the other side of the street and called my friend Jay to come get me. I was starting to feel sick.”

At first the detail of the boot seemed pointless and then I saw the image as clearly as Andrew had, marking the death of the individual. Michael’s boot, the worn, old leather ones that he wore every day. “How do you know the shoe or boot was Michael Lawler's?” Sam asked. “Did you know him?”

“No, never heard of him, but when an ambulance pulled up and the EMTs went in, I was still waiting for my friend. Jay had been sleeping in that morning because he didn’t have class, so he wasn’t there yet. See, I didn’t feel like running anymore, I was nauseous, like you.” He looks at me, then said, “Just like you. Another cop came and took pictures, then they brought out his body covered up like on a TV show. One of the cops said to the other, ‘Anything in his pockets?’”

““License says Michael Lawler,” I’m pretty sure the cop said. “Student ID on him too. University of Rochester student. Suicide.” I didn’t want the cops to notice me, so I stepped back further and ducked around behind a house. Thinking about what I did now, maybe it wasn’t such a good idea because they might have thought I had something to do with it, like I was involved in a murder or something. I mean, he was hanging, but who knew how he got there, even if he did say suicide?”

“Oh, no,” was all I could get out. Sam was crying. Looking back later, I realized Andrew might have been the one to put the word 'murder' in my head.

“You’re sure?” Sam asked, and he nodded. I liked Sam a little bit more during those moments we were drawn together in horror. Whatever else life held for either of us, we experienced a temporary bond in that claustrophobic space where breathing becomes more difficult.

Andrew waited a few minutes but saw that neither one of us was up to questioning him further, so he walked off, ready to repeat his tale. He probably had friends back home who had yet to hear of his dramatic morning. That would be all the experience was for Andrew, an opportunity to enlarge his life.

Sam hugged me, and I took that solace greedily. We finally stopped holding one another. “You okay?” she asked.

“Me either. I’m so sorry, but I’ve got to go,” and we parted. As soon as I left the bookstore, I was hit again, my whole body aching. By the time I reached my apartment, my head hurt so badly that I turned off the lights, pulled the curtains, and rolled into a fetal position on my bed where I stayed for hours. It didn’t help and changed nothing. Hours later, I woke to restless fear and more nausea.

Although I didn’t know Michael well, I was aware of his peculiarities, his withdrawn silence, his intelligence and gentleness. What was certain was I wanted to know him better. What I recognized him best for, however, was his talent. We had read each other’s work on multiple occasions, wrote a few comments that were generous rather than critical. I couldn’t quite believe that Michael had taken his own life, that he was gone. Logically, my search should have ended there with his death and certainty. We were told he had hanged himself. Everything should have been obvious, as related circumstances appeared to be to nearly everyone around me, but suicide and Michael did not fit, would never fit.

My mind kept seeing Michael’s worn boot at the bottom of the stairs and then him swinging when the cop let go of his body either accidentally or deliberately. Unlike Andrew, I was not a witness, had not been at the crime scene, but I might as well have been because I conjured up the sight as clearly as if I had been standing outside in the snow, looking through that open doorway. My eyes followed a line of dread up narrow stairs in disbelief, but I kept turning away before seeing his distorted face, as if I couldn’t bear to look at him in death, even in imagination. 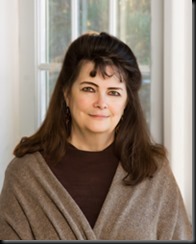 Writer, poet, and educator Nancy Avery Dafoe, Homer, NY, has published books on teaching writing, Breaking Open the Box and Writing Creatively: A Guided Journal through Rowman & Littlefield Education in 2013 and 2014, respectively. Her latest book on education policy, The Misdirection of Education Policy: Raising Questions about School Reform was published by Rowman & Littlefield in June 2016. Her first chapbook of poetry, Poets Diving in the Night, is due out from Finishing Line Press in January 2017.

She recently won the William Faulkner-William Wisdom creative writing award in poetry for 2016 and previously won the New Century Writer award for short stories. Dafoe’s poems, essays, and stories have appeared in numerous literary publications. Her fiction work also appears in the anthology Lost Orchard, published by SUNY Press in 2014.

Posted by Andrew Richardson at 07:01 2 comments: