How ‘The Wood’ Happened

Something readers occasionally ask me is how I got the ideas to put ‘The Wood’ together.  Apparently, with characters having to make their way through a mysterious wood and hemmed in my a ‘magical’ path of skulls, the novel is an unusual concept.  Readers have told me that’s what first drew them to the story. 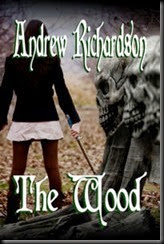 I will say I’m pleased with the story, but the concept isn’t all my own.  It drew on ideas from several other sources.

I never played Dungeons and Dragons (D&D), but I’ve always been intrigued by the thought of characters adventuring underground in enclosed spaces, with only a vague idea of what they might come across.  This is a theme I explore more fully in my forthcoming Wild Child Publishing novella, ‘Dana’s Children’, which is set among underground passages, but ‘The Wood’ still owes a spark to D&D.

The film ‘Alien’ was another influence on ‘The Wood’.  ‘Alien’ features space travellers facing the monster of the film’s title in their spacecraft’s narrow corridors.  Like D&D, this caught my imagination.

So, I knew I wanted to write a novel based around my characters being chased around narrow massages.  I also knew I wanted to do something unusual (rather than caves or a spaceship) to make the story memorable and to give it a better chance of being picked up.

The idea of using a skull-lined path only came slowly.  I’ve always known that Celts revered the head, and severed heads and skulls may have been used as barriers to keep evil in and out.  So, I eventually had the idea of skulls on poles lining my travellers’ path, and the characters risking supernatural evil if they strayed from the path.  And of course a path lined with skulls is a great horror image!

So, that’s how the idea for ‘The Wood’ came about.  The story is quite ‘linear’ and straightforward – although I hope it’s still exciting – so once I had the idea the writing came relatively easily.

Posted by Andrew Richardson at 07:49 No comments: