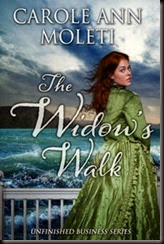 Mike and Liz Keeny are newlyweds, new parents, and the proprietors of the Barrett Inn, an 1875 Victorian on Cape Cod, which just happens to be haunted. By their own ghosts. The Inn had become an annex of Purgatory, putting Mike, Liz, and their infant son in danger. Selling the historic seaside bed and breakfast was the only answer, one that Liz and her own tortured specter refused to consider. Were they doomed to follow the same path that led to disaster in their previous lives? Was getting out, getting away, enough?

I’ve always been a sucker for stories linking two time periods. So, I was delighted to be asked to read Carole Ann Moleti’s The Widow’s Walk, because I wanted to see how the idea was handled in this novel.

After a while, though, it wasn’t the concept of time I found drawing me in, but the work itself. Moleti has pulled together an interesting premise, strong believable characters, and the knack for telling a story, to produce an absorbing read.

Most of the story is set in Cape Cod, which isn’t a place I’ve ever been to. I have read books or seen films set there, and this story gives the same ‘feel’, so I have to assume the author has got this right. The rest of the tale is set in southern England which is my home turf, and I can vouch for the setting’s accuracy here.

I won’t write much about the plot for fear of giving things away. So, to generalise, the story is a strong one, and the plot remains focussed all the time. There are no unnecessary tangents, and loose ends are tidied up. There are sub-plots – for example the family’s financial pressures – but these are woven into the overall and add tension, not complication.

However, as is usual with Carole Ann Moleti’s work, the highlight is her grasp of characterisation and what makes the characters tick. Moleti has put together a strong cast; the characters are all ‘ordinary’ in that they’re the sort of people we all have in our neighbourhoods, but they’re also strongly ‘drawn’, with their own voice which makes each memorable and unique. That all meant I could relate to each of them and cheer for them as they tried to overcome the odds to take control of their own destinies. I particularly liked Mike who is the sort of honest, regular guy everyone wants as a friend, and I really hoped he managed to solve his problems. As I read, I wanted to share a beer with him!

The Widow’s Walk is the second in the Unfinished Business series. The first, a novelette published in Haunted: Ten Tales of Ghosts, offers a sneak preview and is now being novelized. I’ll be looking out for the Book I, Breakwater Beach and Book 3, Storm Watch.

The Widow’s Walk will be available imminently.

To keep up with the latest news visit Carole at: http://caroleannmoleti.blogspot.com/p/the-widows-walk.html

Posted by Andrew Richardson at 20:42 No comments: