‘Footy’ has now been out for around three weeks.  Publication was arranged for the day before a long-planned holiday so from my viewpoint it was inevitable the launch would be a little disjointed. 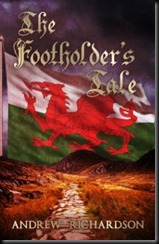 So, I thought I would put everything connected with publication and its aftermath in one place.

PREVIEWS
Carole Ann  Moleti and Carl Alves kindly hosted previews and/or background information on the story or its main characters.

INTERVIEWS
I had a couple of pre-arranged interviews for around the time of as ‘Footy’s’ release.  That fortunate coincidence gave me the opportunity not only to talk about the book and its coming about, but also other writing-related stuff.  Thank you to Sonnet O’Dell and Suzie at Book Nook Diva for wanting to find out a bit about me!

REVIEWS
Since release, a handful of reviews have popped up, all giving ‘Footy’ four or five stars (out of five)

.  Two of these are on Goodreads, with another couple on Amazon.  While that doesn’t say anything about sales, it’s an indication the book is going down well with those who’ve read it.

Here’s a reminder of the blurb:

Math, King of Gwynedd will die without a maiden’s magic to soothe his battle-injured foot. In a court rife with envy, greed and cunning, Math must choose a successor. His nephew falls in love with the beautiful new Footholder and he and his scheming brother plot to win her and at the same time ruin her – a plan which could mean the king’s death. Will the maiden’s bonding with the king cost her life or can she overcome treachery and save both king and kingdom from being torn apart?
Set in mythical Wales, The Footholder’s Tale, Andrew Richardson’s historical fantasy captures the mystical elements of the times and combines intrigue and classic romance, based on Gaelic legends.

‘The Footholder’s Tale’, published by Rebel ePublishers, is available both in print and electronically from Amazon: http://www.amazon.co.uk/dp/0692458301
Posted by Andrew Richardson at 13:45 No comments:

I’ve heard from Damnation Books that ‘Snuff’ is scheduled for release on 1 September. 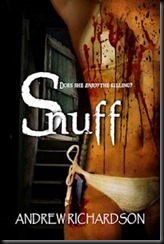 I’ve also had the cover art.  As with all my Eternal Press/Damnation Books covers, this has been done by the award winning and brilliant Dawné Dominique.  As usual, Dawné has produced a belter.  ‘Snuff’ is the most brutal story I’ve written; the cover is hard-hitting and pulls no punches in its reflection of the story.

As a reminder, ‘Snuff’ is about two archaeologists who are kidnapped and forced to take part in fights to the death for a paying audience.  I wrote the first draft many years ago, but it took several rewrites for me be happy that the sex and violence is in context and only secondary to the plot, before sending it to Damnation Books.

At the moment, ‘Snuff’ is with me for its final round of edits.

Posted by Andrew Richardson at 19:44 No comments:

At last, I can reveal the cover for ‘Eton Mess’.  After the stunner for ‘Art Class’, Keith Publications have produced another great picture, which captures the spirit of what was a fun story to write. 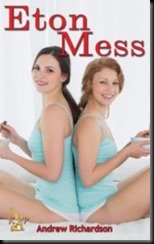 The release date is to be confirmed.
Posted by Andrew Richardson at 18:55 No comments: