I’ve seen a lot of violent horror movies in my time, in which a group of people get slowly whittled down to a last surviving character.  ‘Alien’ and ‘Predator’ are two better known mainstream examples, while in literature Agatha Christie’s ‘And Then There Were None’ is a famous, if less gory, take on the theme.

I’ve had several ‘slasher’ novels and novellas published: ‘The Wood’, ‘The Well’, ‘The Torridon Witches’, and my forthcoming ‘Snuff’ and ‘Dana’s Children’.  So, I like to think I know a little about the genre and the elements needed in a violent story.

I used to think writing a story where the main aim is to bump of characters one by one, in the most grizzly manner possible, would be easy.  But, as the plot is simple and predictable I’ve found these stories among the most difficult to write.  Knowing the sort of thing to expect makes it difficult to keep readers interested.

So, what do slashers need to be successful, considering the plot is predictable?  There is a lot to work into a violent story, but I think there are three main elements:

Characters.  The reader must care about the characters, meaning they must be particularly well drawn – although the genre does allow for the earlier casualties to be a little one-dimensional.  There is also a need for group dynamics – for example, who gets on well with who?  What groups conflicts will stop the characters focussing on the enemy?  What are the likely alliances within the group?  These and other questions help add depth to what is likely to be a shallow plot.  Which character will remain strong, and pull the group together?  That character will probably be the most important and main viewpoint, and so will likely survive until the end.  Think Ripley in ‘Alien’. 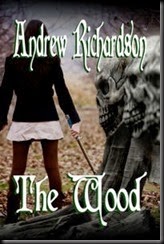 Setting.  Although the setting is in some ways just ‘fluff’, I think it’s important in setting the story’s mood.  Personally, I don’t like these books or films set in places like deserted lunatic asylums or industrial wastelands or where the killer is simply an escaped madman because they’ve all been done several times before.  That’s why I was particularly pleased with ‘The Wood’.  I know I’m biased, but at the time I thought setting a slasher in a mythical world, and making the bad guys mythical creatures, would seem different to publishers and readers.

Resolution.  By this I mean the ending, which will normally be along the lines of the last surviving character facing and overcoming the killer, whether it be a monster, or madman, or something different.  To keep the story fresh and to satisfy the reader I think an ending should be more than just a fight.  There needs to be something imaginative like a twist – although that is probably good advice for any book, in any genre.

Of course, there is more to think about but a short blog piece isn’t the place to go into the minutiae of storytelling technique.

So, there are my brief thoughts on why writing violent horror is more than just lining up a group of poor unfortunates for the slaughter.

Posted by Andrew Richardson at 10:23 No comments:

My regular readers will know I use female characters a lot.  Not exclusively, but more often – and certainly in preference to – men.

One of the nicest things a critiquer ever said to me is that she had assumed I was a female writer, because I understand how women think.  (To be honest, how women think is something I’m very good at NOT understanding, but that’s a tangent I’ll not go down…)

Someone recently asked me why I prefer using female viewpoint to male. I thought it would make a good blog topic, so here goes…

I’d never been comfortable with male characters, although for me it naturally started off as the obvious one to use.  Male heroes in speculative fiction ‘have’ to be strong, single-minded all action figures.  That’s not me at all – I’m much more boy next door than Conan the Barbarian.

No matter how hard I try, my male leads end up like me.  That might be fine for other genres, but it doesn’t work for Celtic warriors in my historical fiction – although for Prince Einion in ‘The Doe and the Dragon’ I deliberately made this a character flaw that played a role in the story.  The same in my forthcoming ‘Footholder’: Prince Einion is a skilled administrator and peacemaker.  In contrast, his brother is a violent thug and the characters ‘bounce’ off each other.

I first tried it seriously for a short (‘Snuff’, in ‘Unhinged’ issue 6).  The story wouldn’t have worked without a female lead, and to my surprise I found it easy (or should that be less difficult?) to do.

In fact, when I have both male and female leads in a story, any critiquers’ concerns about characterisation will usually relate to my male character and not the female.

(Sexism alert…)  I think it’s because a female lead can get away with thinking her way out of a problem, rather than going in with all guns blazing.  That’s more me, too.  There are exceptions, of course (Xena; Ripley in ‘Alien’) but in general a female lead doesn’t have to be gung-ho and all-action.

The many females used by my writing hero, Richard Laymon, manage to retain an ordinariness – and dare I say likeability - that probably wouldn’t be strong enough in a male lead.  I think my main characters follow Laymon’s pattern, and so for me female viewpoint characters work better than male.

Posted by Andrew Richardson at 14:24 No comments: