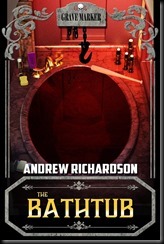 After going through the editing process, my latest horror novella, ‘The Bathtub’ is now available.  The story is one of my rare ventures into pure splatter, being about a woman who is trapped in a bathroom with a couple of colleagues.

This is my sixth published novelette or stand alone short story.

Posted by Andrew Richardson at 19:50 No comments: