Writer John R. Sikes has two (yes, two!) books published by Rogue Phoenix Press in December – ‘A Smuggler’s Story’, and ‘Just After Daylight’. Here’s how they came to be written, in John’s own words.

Rouge Phoenix has a great cover designer, Genene Valleau has been a treat to work with. She has a uncanny ability to see what I am thinking. With the cover of A Smuggler’s Story, she sent, the first draft so close to what I wanted it was scary. The book is about the early days of pot smuggling out of Mexico and Colombia into the United States. I had asked for the elements of how the pot was smuggled to be on the cover. The way she placed the plane, ranch and hikers together, was exactly what I had in mind. She comes highly recommended.

I spent a year traveling around the drug routes here in Mexico gathering information for the book to get the feel, not only from the country, but what the people involved were like also. It amazes me how quick people living in a war zone become accustomed to the violence and death that is happening all around them in the war zone. For most of two years when leaving the house driving down the road, we would survey the fence line for human heads, spiked on the fence post along side of the road during the night. Something not often found in the USA but a common occurrence here. The book tells the story of how it started and what help create what is going on right now.

A Smugglers Story and Just After Daylight will both be released December hopefully in time for Christmas. With pot recently legalized in several states the timing of the books release couldn't have happened at a better time. Again, I owe this to Rouge Phoenix Press. Christine and Arlo the editors at Rouge are both worth their weight in gold to a writer like me.

Just After Daylight came about because of the response from my first book of short stories. I created both books of short stories from my person experience as Captain on the ocean and river guide during my life as a professional fisherman. I owe the books to not only all the people in the stories but to work from the illustrators as well. The stories started out for magazines, but on the request from the one of illustrator were sent to different publishers for consideration. I originally sent them to forty three different publishers to look at. Three different ones sent back letters of interest. I went with Rouge and have never regretted it.

The cover cartoon for both books At First light and Just After Daylight was drawn by illustrator Jim Borer. He has taken over since the sudden death of Glen Duncan who started doing them for the first book, At First Light. Glen is surly missed. Glen was the person responsible for convincing me to put the stories together for a book. Genene Valleau tweaked the cartoons a little bit, added text and came up with a cover that really represents the contents of the book. In both of the short story books, I wrote the story, sent it to the illustrator to read and left it up to them to come up with the cartoon to match.

Hope you enjoy them as much as I did writing them.

I am currently working on my third book of short stories and a sequel to Fisherman's Son. They will be finished sometime next year, if the Lords a willing, and the creek don't rise. 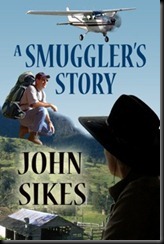 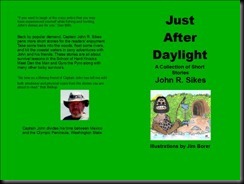 Captain John Sikes spent over thirty years as a professional fisherman. Fishing the Bering Sea, Grand Banks, Gulf of Mexico, North and South Pacific. He helped in surveying fish stocks for National Marine Fisheries along the entire United States coast. He ran fishing charters for salmon, halibut and bottom fish out of Sekiu and Neah Bay Washington untill he retired from fishing in 2011. He guided fishing trips down the rivers of the Olympic Peninsula during the winter steelhead season when not working on the open ocean.

Captain John now spends his winters in the mountains of Mexico. Summers fishing and hiking in the Pacific Northwest and traveling around the rest of the world. He has written four books. "Fisherman's Son," is novel about a young fisherman's exploits on the ocean chasing halibut, salmon, crab and tuna. "At First Light" and "Just After Daylight" are books of short stories about guiding, chartering, fishing, hunting and survival. "A Smuggler's Story" is a novel about the early days of Marijuana smuggling into the United States from Mexico and Colombia.

You can find his books at amazon.com, www.roguephoenixpress.com, Kindle, Barn&Noble and many other ebook stores.
Posted by Andrew Richardson at 18:58