I’d like to welcome author Colleen June Glatzel and her new book, ‘Hey, Joey Journal’, published by Rogue Phoenix Press.  During this book tour, Colleen will give away a digital copy to a lucky commenter. 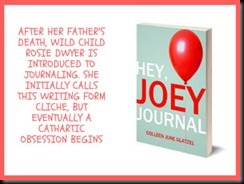 After her father’s death, wild child Rosie Dwyer is introduced to journaling. She initially calls this writing form cliché, but eventually a cathartic obsession begins.

After the psychologically scarring death of her father, wild child Rosie Dwyer is introduced to journal keeping. She initially considers this writing form to be cliché. Before the death, Rosie valued chaos and rebellion- from “protest-peeing” in class to shoving a Twinkie in a classmate’s eye. However, once Rosie gives into this mode of writing, a cathartic obsession begins.

Her entries often focus on her childhood enemy, Logan Fields, after he becomes Rosie’s permanent peer editor in creative writing class. While Rosie loses touch with both loved ones and reality, an unlikely friendship builds between her and Logan. Together, they must try to find the meaning behind insanity- in the school theatre, in the public library, and in the middle of a false Apocalypse.

That “Dear journal” shtick is overused, so I’ll address you with the word “hey.” Hey, journal. I usually write exclusively on scraps of paper. Underneath my bed is my literature’s habitat and the paragraphs are seldom about anything. Last year, I discussed career goals with my high school’s counselor. Once my writing aspirations were revealed, Counselor became giddy and asked about my writing style. She said, “I’d love to hear about it, Rosie.”

“It’s disorganized,” I said. Then she handed me this ginormous journal and I witnessed a disgusting “I’m-a-cool-adult” wink.

This is the first time I’ve cracked you open.

Time seems to have decelerated. The slowing of time is the only gift August 2012 has coughed up. There’s been a drought, among other eyesores. I’m beneath our backyard’s oak tree, its gargantuan arms stretching far, shade encompassing the entire lawn. Many leaves are dehydrated. It’s as pleasant to lie beneath as Magic Mike is to watch. Allow me to explain that analogy. The film’s previews had me expecting a rollicking rom-com...something less serious. It differed from the ads. Still, every scene featuring scantily clad men made it worth the cash. That’s what happened with this shade. I’m below it, experiencing a full body itch, but it could be worse. Due to lacking rain, the ground isn’t summer turf in the slightest. Imagine wearing a pantsuit crafted out of hay and sandpaper. The shade is nice, though. Makes me able to bear my eyes being open.

Jumping Jesus on a pogo stick. I kid you not, as I placed the period after “open,” a bird landed in my eye line and inched toward me. Soon, it was atop this journal. I thought, Birds are flighty. Timid. Not this one. Its eyes were a familiar mess. I was confronted by the undeniable fact that birds were my dad’s favorite animal. I blinked, eyelids capturing wetness and holding it hostage. Moisture subsided and the bird was all kinds of nowhere.

I wonder what it would be like to sprout wings. To be gone. My pencil is begging me to release it from my monstrous grip and my legs are screaming, “Let us run far away, Rosie.”

I’ll do what I do best and let my impulses win. Run until I get scared and retreat. Run until I realize it’s not the same as flying. Run. 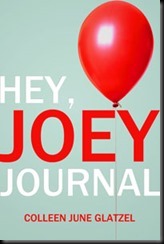 I’m not counting the days that have passed since it happened. When a person starts counting the days following an event, it becomes part of a timeline. Then, by consequence, it is cemented in reality. I’m fortunate. My brain is still too immobilized to visualize random numbers floating in space. I’m unable to make numbers relate to each other, events, time or anything at all. Because of this, I don’t know how long it’s been since he died. It’s messed up, but I prefer this ambivalent uncertainty.

I’ll speak of something I know for sure. Today’s bike ride destroyed me. August is going too fast. It’s only the 18th, but it feels like the month is nearing its conclusion. The weather is far too chilly, honestly. Deflated bike tires carried me down the sidewalk of my street. I normally ride in the road, but I haven’t been in the mood to care about the well-being of pedestrians lately. Those tires were spinning, moving like the earth’s orbit around the sun, constant and circular, at least seemingly so. Home was in sight. My eyes were on the trees above. I was gliding. Gliding. The leaves were rustling. The world was unsettled. God attached a handle to the South Pole, stuffed the globe full of beads and shook this planet like a giant rattle. God’s infant-like cries resonated and the wheels came to a screeching halt, all because the malicious fates placed a tiny, dauntless bird on the sidewalk of Kale Avenue. I ran over the motionless bird. Accidentally. Then I pried my fluttering hand from my mouth and threw my wheels into the street. Seconds later, a police car demolished the bike and veered to the roadside.

The uniformed man shot out of his vehicle, completely uncentered. There was a restricting quality to his aura, accompanied by an unprecedented ability to snap. Light brown is the color of a traditional rubber band, and when it comes to auras, it’s a color associated with discouragement. His body language was discouraging me the second he exited the car.

No, I’m not a psychic. I don’t see colors framing the forms of people. However, I do see people for who they are and enjoy describing this reality I perceive with the same language aura seers use. I heard all about auras growing up under the care of parents who lived to study metaphysical concepts. Much of the gobbledygook they taught me is too much for my logical brain to handle. Both my parents underwent past life regression, for example. Listening to my dad talk about his life as a Vietnamese peasant girl creeped me out. But auras? I was somehow able to get on board.

While laying eyes on me, the uniformed man eased. He’s one of the cops who came when my dad’s body wasn’t doing things it should be doing. Like, you know…living. I was the girl the cops found in the disheveled garage, after I found… Nope. No. Nope. 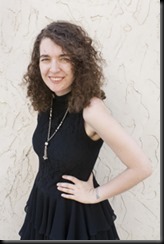 Colleen June Glatzel is a writer from Waukesha, WI. She writes mostly fiction, but is interested in exploring other categories now that her first book, Hey, Joey Journal, is published. When Colleen isn’t writing, she deals antiques, acts, performs improv comedy, makes collages, paints and spends time with her family.

Posted by Andrew Richardson at 18:24