I’d like to welcome author Ian Barker, a fellow writer published by Rebel ePublishers, to talk about his work and how he approaches his writing. Ian’s Rebel publications are ‘Fallen Star’, about how a rock star copes when his band splits, and ‘One Hot Summer’, which evokes youthful memories of the scorching summer of 1976, which I remember well. He has also authored ‘Late Show’, a collection of short stories, some of which previously appeared in magazines and anthologies. 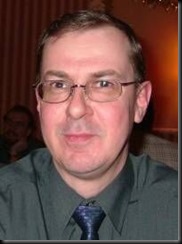 Ian comes from Chesterfield, Derbyshire, and currently lives near Bolton in Greater Manchester. He has a background in writing, as a staff writer and then editor for various computing magazines, and also had sketches broadcast on BBC Radio 2's ‘The News Huddlines’. He is now a freelance technology writer, and, as his Twitter page says, a nice bloke.

So Ian, your novels, shorts, etc, are on a variety of subjects and genres. Where do your ideas come from? Does a common theme run through your different stories?

As far as novels go they’re mostly on a coming of age theme or perhaps more accurately – especially in Fallen Star’s case where the characters are a bit older – finding a better understanding of life, ‘coming of sage’ if you like. The short stories, to some extent, follow this theme too though they are rather more varied, mainly because many of them were written in response to prompts and contests on writer’s website I belonged to for many years.

Given your wide variety of subjects, do you need to change styles for each story? How do you cope with the different needs of each subject and with the change between shorts and the longer form?

Good question, I always try to make my stories character driven, so the style of the writing tends to come from the people I’m portraying. I find that sometimes this can be quite subconscious so, for example, if I’m writing about a character who works in a kitchen I’ll find myself using food similes. I quite like the constraint imposed by short pieces, they’re a good way of forcing you to focus on what’s important for telling the story, you need to make every word count. That can prove useful when it comes to writing a novel as you’re less tempted to pad out the text with unnecessary descriptions or peripheral events.

Your background is in the media, writing for radio etc. Did that ready you for the long slog of approaching a novel, or did the writing process spring any surprises? Did you learn any new lessons while doing the novel?

Did it ready me for writing a novel? Absolutely not! Writing a novel is a very different process and, for me anyway, a much harder one. You have the space to develop themes and characters in more detail, but at the same time you have to sustain things over a longer period. You also need to plan ahead to avoid writing yourself into a corner, a trap I’ve fallen into more than once. It’s also the case that when writing is your day job it can be hard to find the motivation to do it in your spare time as well.

How long on average does it take you to write a book, from planning to polishing, ready for submission? How much of it is research/planning/editing, and how much the actual producing?

At least three years. I tend to start with a fairly loose idea of what I want the book to be about and go from there. Research is usually undertaken as I go along – the IRA stuff in Fallen Star for example – as required by the plot, so it’s difficult to say what proportion of time is spent on that as opposed to writing. I also like to write the ending of a novel fairly early in the process so that I have a target to aim for. I’d say editing and polishing accounts for at least a year after completing a first draft. I also think it’s important to establish a bit of distance before starting to edit, so I like to put the completed draft aside for a month or so then come back to it with a fresh perspective.

You have an easy, relaxed style of writing and tell stories through characters, not through yourself, and to this reader it seems you write with your feet up. Presumably it’s not as easy as your output makes it look, but is your style natural, or has it taken a lot of honing?

One of my school English reports from when I was about 12 says, “Ian has an easy style and interesting ideas,” (thank you, Mrs Watmough). So I guess there’s a degree of natural talent, but it does take a lot of polishing to achieve especially at novel length. One of my writer heroes is the late Douglas Adams, his writing flows effortlessly into your brain, but it’s well known that he used to agonise over every word.

I think this is an area where media work does actually help as it teaches you to put across sometimes complex ideas in a way that is accessible to non-expert readers. Reading your work aloud helps, if you stumble over something it’s an indication that readers will too.

Fallen Star
Fallen Star takes us to the glamorous (or in places not so glamorous) world of rock bands. Have you ever played in a band, or been associated with the music business? If not, how did you research the background? – I’m no expert, but it all seems realistic to me.

The book was inspired by my catching a reality TV show – the BBC’s ‘Fame Academy’ circa 2002/3 – in which people were trying to become pop stars via a sort of hot house process where they were all locked up together. It started me thinking about what would happen if you turned the situation on its head, began with someone who had become a star almost by accident and you suddenly took their fame away.

I haven’t been in a band myself, research came from reading magazine interviews with music industry figures - ‘The Word’ magazine, sadly now defunct, was a particularly good source – and biographies of musicians and music journalists. What became clear from a lot of this was that real life in the music business was sometimes a lot less believable than fiction and that I’d have to tone things down a bit!

I was really impressed by the way the characters slotted into the story, and each had a part to play without seeming forced into their role. The characters are strong and defined, interact naturally, and are all skillfully woven into the plot. What came first; the plot that needed these characters, or did you start with these people, and mould the plot around them?

The plot came first. The basic idea of taking away fame gave me Karl. I realised I’d need conflict so the father who disapproved of his career choice was the next step. That then deepened by adding in Gerald’s military background and love interest Lizzie’s Irish republican connection. Road manager Graham – as you might have noticed – also appears in One Hot Summer, this is because the books were written in the ‘wrong’ order, OHS I wrote and collected a pile of rejections for first and then bottom-drawered it while I wrote Fallen Star. I intended Graham to be a walk-on character in the second book, much in the way Nick Hornby slips characters from ‘High Fidelity’ into his later novels, but as the writing progressed he rather built up his part. 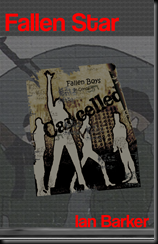 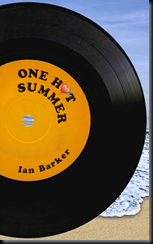 One Hot Summer
I remember the summer of ’76 with some fondness myself, particularly the heatwave and droughts and standpipes. For those readers who too young to remember it, could you outline some of the joys of the mid-seventies, particularly those influencing the story?

Journalists and documentary makers often seem to give the 1970s a bad press. While the ’60s are flower power and ‘All You Need is Love’, the ’70s are power cuts and ‘Part of the Union’. But, while that view is true to some extent it’s become a cliché, the ’70s were also a great time – especially if you weren’t burdened by adult responsibilities.

Economically living standards in the UK were relatively high and people began to be able to afford luxuries like foreign travel, colour TVs and central heating for the first time – no more waking up with frost on the inside of the windows as I remember from being a child in the ’60s. Popular music had built on the previous decade and developed sub-genres like prog and glam, and of course was working up to the explosion of punk. This cultural experimentation was reflected elsewhere too on TV, for instance, you had the anarchic comedy of ‘Monty Python’ and ‘The Goodies’, and gritty new dramas like ‘The Sweeney’.

Compared to today it was also in many ways a more innocent time, no internet, no mobile phones and only three TV channels, which all went off after midnight. And of course in 1976 the weather was excellent.

The decade does seem to have been undergoing something of a reappraisal of late with increasing numbers of books, films and TV dramas being set in the ’70s. I hope I’ve made some small contribution to that, though I’m conscious that we might be slipping into a costume drama, Jane Austenised version of the time. I also find myself becoming a ’70s pedant, spotting errors in period detail.

You get deep inside the teenage John Burton, who is a compelling character. Was it difficult to write from the teenage viewpoint?

I started with the advantage that I was a teenager in the 1970s, so there’s a certain autobiographical element to the book. Music plays a part here too, there’s nothing quite like a tune to provide an instant mental link to a time and place – hearing ‘Bohemian Rhapsody’ takes me back to the sixth form common room every single time. I also suspect that most men don’t really grow up all that much after the age of 18, so it wasn’t as hard as you might think. Oddly what I found much more difficult was portraying the parents, who would in 1976 have been about the age I was when I was writing the book.