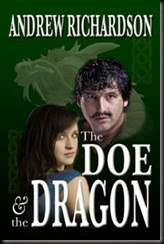 I’d always wanted to write a story based around fifth century north north Welsh myths, which resulted in ‘The Doe and the Dragon’.

My background is in the novel’s time and place, and it was important to me both to get the legends right, and to write something historians would find at least plausible.  Blending the mixture of history and legend, and also getting the ‘facts’ straight, was one of the most enjoyable parts of the writing.  Getting the people right was particularly fun.

The story is placed in the generation before King Arthur, and features those Arthurian characters who also appear in the rich Welsh legends.  So, which characters who Arthur would have known, are included?

Posted by Andrew Richardson at 16:47