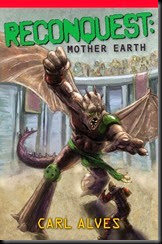 I don’t read a lot of science fiction, but I enjoyed Carl Alves’ ‘Two for Eternity’ so I was happy to make a rare journey into the genre to try his ‘Reconquest:  Mother Earth’.

I wasn’t disappointed.  Despite not knowing one end of science fiction from the other, I found this story of humans coping with the aftermath of an alien invasion really easy to get into.  That’s probably because the ‘science’ is largely there in the background.  The story is about a struggle to survive, and as such was about a character and plot rather than about the genre.

I also found that man’s – Mitch – struggles engrossing.  Although he is larger than life in a sometimes Conan-esque way, he is above all human and with human flaws, aims and desires we’d all recognise.  That made him the sort of hero I could identify with and I found myself rooting for him as he fought his battle against the odds.

That doesn’t mean the plot is secondary – the background of alien invasion ties in well and gives a background to Mitch’s struggles to survive as well as driving him on.  The secondary characters are also well presented and rounded.

But the best bit?  The ending.  The easy route would have been to set a big, final battle between alien and human forces.  However, Alves has taken a different approach, and the story is much more satisfying for it.

In all, I thought this a good read.  In this case that’s a particular compliment because I haven’t come across many science fiction books that have kept me hooked throughout.

Posted by Andrew Richardson at 16:31