I’d like to welcome author Jessica Evans to talk about her first novel, ‘Hippie Mafia’, published by Rogue Phoenix Press.  During this book tour, Jessica will give a way a digital book to one lucky commenter.

Hippie Mafia is a story of urban redemption, examining how greed and loyalty influence decisions in a sub-culture that is generally accepted as being peaceful and without strife.

Hippie Mafia is a multi-voice narrative that examines gender roles within the constructs of urban identity. The antagonist of the work, Mason, is the antithesis of the female archetype, both in her decision making skills and in the progression of her character through her stand-alone agency. The female protagonist, Amy, is one who responds to the situations she finds herself in as one might expect of a standard female character. It is the hope of the work that these two conflicting female identities will help the reader to begin to understand and examine ways in which female characters do not need a male counterpoint to advance their own stores. 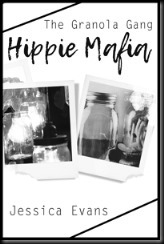 The Granola Gang Book One

Refuting the claim that Hippie Mafia is strictly a Southern California cultural phenomenon, propelled by drug users and dealers, Jessica Evans takes readers deep into a group within the counterculture of Cincinnati, Ohio in her new novel Hippie Mafia: The Granola Gang. As benign and healthy as the subtitle sounds, Evans’ gang is anything but hearty or harmless to each other. Betrayal ultimately strains and unravels the bonds found in what was once a tight-knit “family” of drug users chasing Phish on the circuit.

Propelled by the rawness, as well as naturalness of dialogue, the narrative moves with agility and acceleration until the denouement:

“‘Hello,’ I offer. She looks around the room like she's seeing it for the first time, too.

‘You know, a room like this,’ she says, waving her hand, ‘with four blank walls and nothing to do or anyone to see.’

This is a subculture the author appears to know intimately, with knowledge of “moving weight,” yet Evans’ narrative is empathetic. At the center of this group of friends, who grow, cook, sell, and use, are the slightly unusual best friends Mason Williams and Dugan Reeves, and brother and sister Amy and Ghost Barnes. Mason is a lesbian with a tough outer shell and a soft inner core. Dugan is half in love with Mason, as well as in love with Amy. Their lives of casual and serious sex, love affairs, fighting, stealing, drug use and selling, parallel their individual and collective search for redemption on the less-than-prosperous streets of Middle America in Cincinnati.

We come to know Amy, Angela, Beata, Mason, Ghost, Dugan, Nola, Ian, Julian, and Theseus intimately, these characters who took communion in drugs on tours. Their sacrament, however, comes with an end date. Almost from the opening pages, we know it will be Mason who betrays the family, but Evans’ story examines people, not caricatures, the how and why, as much as taking us inside the limits of loyalty and love within this counterculture.

Brother and sister Amy and Ghost may be the heart of the Granola Gang, and Ghost quite possibly dispenses the wisest words, even from his tentative stance: “‘All I'm saying is you're too narrow. Your focus is too pinpointed. It's always Dugan. Dugan can't just be your whole world. Let this be it, man. Get your ass out of there while you can still remember who you are.’”

Mason and Dugan spur the action, but it is Theseus and Julian who symbolically orient this novel that is as much about love and fumbling attempts at redemption as drugs, violence, and betrayal.

Amy shakes her head and looks at Ghost. He wonders just what his sister is thinking, and why he can't see the same kind of rage he's feeling in her.

"So, what? We need to go get you packed?" Ghost's mind is thinking ahead to the logistics of getting Amy out of the apartment in Norwood. He knows Julian has an extra room at his spot in Mount Auburn he would gladly offer up to Amy.

"Your girls know? Beata? Who did you tell?"

"I couldn't," Amy starts, shaking her head, "I couldn't call anyone. The only one who knows is you. Beata would've come last night."

"So would I if you would have called me right after it happened. You shouldn't have waited. I would have been right there."

"But I know you. Your temper. Really, I was worried about what you would do."

"You mean you were worried I'd force you to make the right choice is more like it."

"Something like that," Amy says into her palms. "Like I don't think he set out to do it. I'm sure he was stressed, and whatever he was on didn't help. Probably, I should have just left when he started yelling like that."

"So what, now you're justifying his behavior? You sure this is the first time?" Ghost squints his eyes at Amy, trying to read into her.

She nods her head but doesn't say anything, confirming Ghost's suspicions.

"Right, well. We still need to get you out. Since no one knows, I'll just tell Julian your spot has ants or something. I don't know, I'll figure it out. We need to get back over there and get you a bag of whatever you need. I'll handle getting the rest of your stuff out later."

His mind in overdrive, Ghost sees him helping his sister move out of the apartment. He's never disliked Dugan, but he's never been a big fan either. There's something to be said about a dude who has a chick for a best friend. Something about that has never sat well with Ghost, and looking at his sister's face, he wonders if he's known something like this would happen all along.

"Why are you arguing this with me, homie? I don't get it."

"It was an accident, man. I can't just get up and leave over something Dugan didn't mean to do."

"Yes, you can. You should. You will." Ghost lets the words sit between he and his sister before going on. "When we were little, there were a million times I wanted to be able to do something to save you. To save us. To get us out of that bullshit we had to deal with. I couldn't then. Had no money, no heat, and no options. Now I can. You need to listen to me, Amy. Listen hard. You say this was the first time, we both know that's probably not true. But this was probably the worst so far. You think he's just going to stop? That all of a sudden a chump ass dude like Dugan is going to realize he shouldn't go around hitting females? You have to see it's just going to keep getting worse. I mean, you have to. Until the next time you call me, it's not going to be about a black eye, but a broken arm, or getting shoved down the stairs, or a slug in the chest. I get that you want to be solo and indie and all that. Cool, I dig. You can't do this on your own, and you can't go back to him."

"I don't know what to do." Amy reaches for her cheek. "I hear you, brother. I really do. Promise this was the first time, but I can see how you might think otherwise. Thing is, I know you're right. I can't just leave. I can't abandon him like that. I know he didn't mean it. I called you because I was scared. Looking in the mirror and seeing this is not the way to start a morning. Shit freaked me out, and I didn't know what to do. Just running away isn't going to solve this problem either."

Ghost shakes his head. "Amy, you realize how you sound right now?" he asks. "I mean really. I've watched you over the last few years let yourself get so wrapped up in this dude, you've lost all your drive. Remember when you were a person outside of Dugan? There was this whole other life you always talked about, the one where you're getting out of the city, doing something with yourself. Now what? Dude's clocking you in the jaw and you're growing boomers in your spot? How is that any different from the shit we saw growing up? Thank god you're not pregnant at least."

Ghost's voice has been steadily rising. A few of the early morning coffee sippers are cutting sideways glances at their table. Ghost realizes they're being observed and tries to dial it back in a bit.

"All I'm saying is you're too narrow. Your focus is too pinpointed. It's always Dugan. Dugan can't just be your whole world. Let this be it, man. Get your ass out of there while you can still remember who you are."

Amy stares at her brother, unflinching. Her eyes move in a pattern from the table to the sugar canister to Ghost's eyes and back, a constant revolving circle, as if she's running on a wheel. She sits like that for a while, and Ghost doesn't say anything, hoping his words are sinking in and will have some effect. He's already cleared his schedule for the day so for the first time in a while, he has nowhere else to be, nothing more important to do than to sit and vibe with his sister, to protect her the ways that she protected him for so many years. He finishes his coffee and stands up.

"I'm getting another one. You need an answer by the time I get back."

Amy looks at the line, four people deep, and then down at the ground. She doesn't say anything to Ghost, but nods her head. Her mouth forms into a flat line and she starts chewing her cheek.

"You're going to chew a hole in your cheek, kid," Ghost says lightly, putting his hand on her shoulder. It's a throwback to something their mother used to say before she went off the deep end and landed herself in prison. Amy smiles wanly and pats Ghost's hand.

"Sounds like something Mom used to say," she replies.

"I'll get you another cup," Ghost says as he walks off. 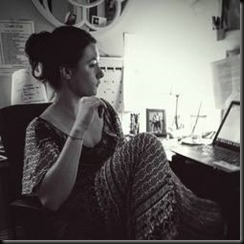 Jessica Evans is a Cincinnati native. Her work examines the ways in which personal experiences shape perspectives. She has earned an MFA from Spalding University. Currently, she lives at the base of the Wichita Mountain Range, where she’s falling in love with wide open spaces.

Posted by Andrew Richardson at 10:37