With my fist love being history, I’ll jump at the chance to read any novel set in multiple periods.  That’s exactly what Carl Alves offers in his debut novel, ‘Two for Eternity’. 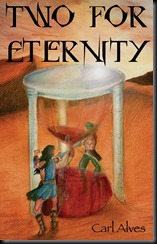 The premise is an eternal battle between good and evil in the form of two immortal brothers.  The viewpoint character epitomises good, and his brother, evil.

The novel shows us the brotherly conflict over many lifetimes and thousands of years, from prehistoric Africa to the present day, all the time building up to an inevitable yet gripping climax.

For me, the premise works.  Alves treats the conflicts and the characters’ rebirths as if they are nothing unusual – which they aren’t for the characters.  This makes the fantastical plot seem credible.  I particularly liked the way the ‘good’ brother showed the downside to immortality through the impact of his memories, which helped add to the story’s depth.

The characters either are, or are linked to, several well known historical people.  This gives the reader something to identify with, even for the lesser-known historical periods.  However, the plot is so skilfully woven and the brothers such strong characters the settings almost become secondary.

Passing through multiple time periods gives the book a feel of pace.  Alves doesn’t let things get dull anyway, but the moving through history maintains the pacing.  There were things I had to do between reading sessions, but the book kept me hooked to the point I found it difficult to find a convenient place to put it down.

Novelists are told to steer clear of flashbacks, but Alves skilfully mixes up the chronology to give backstory at just the right time.

If I have a couple of criticisms, it’s firstly that I would have liked more period ‘feel’ for a handful of the settings, and I think the brothers’ immortality could have been expanded upon.  However, these are pretty nit-picking criticisms of a novel that kept me hooked throughout.  They certainly didn’t stop me enjoying the read.

‘Two for Eternity’ is available from, among others, Weaving Dreams Publishing.

Posted by Andrew Richardson at 21:35