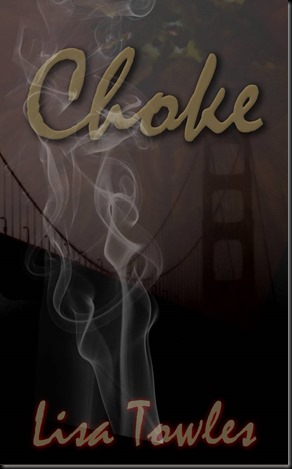 What does a missing hospital patient in San Francisco have to do with a scientific discovery on the opposite coast that could put a serious dent in pharmaceutical industry profits? It’s a mystery that crime novelist Lisa Towles draws to a riveting conclusion in her fourth full-length novel.

Kerry Stine is a nursing assistant at a San Francisco hospital who is blamed for the disappearance of a patient from the intensive care unit, while Adrian Calhoun is a scientist on the East Coast who finds himself in danger from Big Pharma operatives after developing a cancer-curing cigarette.

“A cleverly-written, smart thriller that kept me guessing, and at times holding my breath.”
- Christine Husom, author of the Winnebago County and Snow Globe Shop series of mysteries

“Towles takes the reader on a heart-pounding journey. The unlikely intersection of their stories delivers unparalleled suspense. It’s a smart, well-written thriller that will deliver on the big screen someday as well as it does on the page.”
- Leo Bottary, author of The Power of Peers

“A cigarette that cures lung cancer? Who could be against such a concept? If you can’t figure that out, just heed the basic advice of any crime investigation—follow the money, which is what Lisa Towles has done in her magnificent story. I read this with the pleasurable company of a pack of Marlboros … smokin’ good read!”
- Les Edgerton, award-winning author of The Death of Tarpons, The Rapist, The Bitch, The Genuine, Imitation, Plastic Kidnapping and others

“Choke’s complex characters fascinated me. Its layered dilemmas – threating both individual lives and the lives of cancer victims across the world – grabbed me by the throat. Lisa Towles’ new thriller is a must-read. It kept me in suspense the whole way through – and inspired me in the process.”
- Judith Schiess Avila, NYT best-selling author of Code Talker: The First and Only Memoir by One of the Original Navajo Code Talkers of WWII

“Lively descriptions, characters, and dialogue make this a highly readable page-turner.”
- Albert Noyer, author of The Secundus Papyrus and other novels

Lisa Towles specializes in writing crime mysteries when not working full time in the tech industry and completing an MBA. The author of numerous short stories (under her previous name of Lisa Polisar), Towles also has contributed feature articles, columns, art reviews and book reviews for a variety of newspapers and periodicals.

An active member of Mystery Writers of America, International Thriller Writers, Sisters in Crime, and Crimespace, Towles is a New England native who earned two journalism awards from the National Press Women’s Association and the 2016 National Engaged Leader Award from the National Society of Leadership and Success.

Towles graduated from the University of Hartford’s Hartt School of Music with a Bachelor’s degree in music, majoring in flute with a minor in psychology.

In her five decades on earth, Grace Mattson had learned to pay attention to instinct. And right now hers was telling her not to touch the envelope sitting beside Neville’s note. Instead, she gazed upon it, using her powers of perception and everything Sherlock Holmes had taught her about the observation of details. The most significant of which, however, was the churning feeling in her stomach.

“You’re right to be cautious.” The female voice startled her. “I would be too.”

Grace noticed the umbrella even before seeing the woman’s face. It was a smooth, sculpted face with mistrust woven into its elegant features. “I can’t decide whether to invite you for tea or sick my Doberman on you.”

The woman blinked, revealing dark blue eyes. “I would prefer tea with an English woman than death by an invisible dog.”
Grace allowed a momentary smirk. “I don’t suppose I look like a dog-person.”

Something about her, this woman with impeccable taste in clothes, fashionable without a hint of overstatement, and her steely voice, caused Grace’s heart to thud inside her chest. The blue eyes stared evenly, and Grace’s palms felt clammy. What was this about, and why had this woman watched her and Adrian at Atticus?

“Come in then,” Grace said finally, “we’ll have tea in the garden.” And I hope I live through the experience.

The woman followed her inside, and Grace unlocked the back door. “I’ll boil some water. Please, make yourself comfortable.” She pointed to the back yard, to a vine-covered trellis, under which sat two Adirondack chairs adorned with flowered pillows. She hated those pillows. A gift from Neville, she’d wondered if they were Neville’s way of making her more soft or feminine, somehow.

“We’re interested in your research,” the woman said after Grace came out to meet her.

“What I mean is …very interested,” the woman went on, ignoring the question. Her voice was flat, monotone, controlled, without a hint of inflection or emotion. Was she an android? A highly functioning artificial life form such as she’d seen on the SyFy channel so many times? The woman’s face looked as though it hadn’t ever cracked a smile. The skin was beyond smooth and the eyes looked hard, almost menacing. Just as the woman used her voice simply to deliver instructions, rather than the sharing of communication.

Grace fondled the sealed black envelope. “And this is to offer me a million dollars for it?”

“And who are you, exactly?”

The woman slowly crossed her legs. “You can call me … Beth.”

“Well, I could call you a lot of things. But that doesn’t answer my question.”

“I’ll say it again – my employers are very interested in your research.”

“What research are you talking about exactly? I’m a retired ethnobotanist, I teach gardening classes and breed rare species of plants. It’s not very exciting, I assure you.”

“Not only orchids. But yes. You want to know how I do it? Come to my greenhouse, I’ll show you.”

“We’ve been to your greenhouse.”

Grace’s palms felt slick with sweat. She took a slow sip of tea, reminding herself to breathe.

“In fact, we’ve been going there for the past six months. It’s not there.”

For what felt like a long time, neither of them spoke. Not one single bird chirped, no traffic sounds, pedestrians, car alarms, or sirens.

“We’re prepared to pay for what we want.”

“We’re not in the business of kindness, I’m afraid.”

The woman sighed, uncrossed her legs. Then crossed them the other way. She looked uneasy, as if she were about to launch a different tactic. “The decisions we make affect the economy, on global levels.”

The woman smiled and looked toward the house.

“Water’s boiling. Pardon me, I’ll be right back.”

Grace returned with a bamboo tray containing a pot of tea, two cups, a pitcher, and tiny bowls for milk and lemon.

“Royal Doulton,” Beth commented with what seemed like admiration. But Grace knew already that she was not what she seemed.

“It was my mother’s,” Grace said and swirled the brew around in the teapot and then poured.

Beth held the cup and stared intently into the liquid, glanced at Grace, and returned her gaze to the cup.

“I’m still not clear on what research you want.”

“You know what we want.” The woman sipped the tea.

“Careful, could be poison,” Grace said and stared.

She watched the woman take two more sips and then soundlessly leave down the side walkway toward Kensington. She continued watching her all the way out toward Chapel Street, and then slowly opened the envelope. On one heavy sheet of stationary paper appeared a single typed sentence.

The research in exchange for your partner’s life.

Adrian, my God, she thought. What have you done?

Posted by Andrew Richardson at 17:28