I’d like to welcome author Maggie Mundy to talk about her book, ‘Unmasked’, published by Rogue Phoenix Press.  During this book tour, Maggie will award a prize to a randomly drawn commenter. 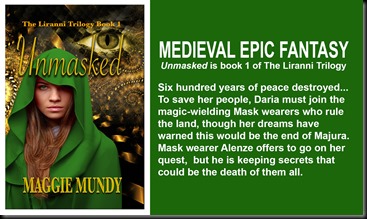 Corrupted magic is hard to fight when you’re the only one who believes something is wrong. Daria faces a battle to save her world.

Six hundred years of peace are destroyed when Daria’s settlement is attacked. It is the start of problems for the land of Majura. Daria saves people with magic and must join the magic wielding Mask wearers who rule the land. Her dreams have warned if she became one it would be the end of Majura. Are the Mask wearers keeping secrets or is she the only one who can see the power in the land is changing. A Mask wearer called Alenze believes her and offers to go on a quest with her to fix the Essence where the magic comes from, but he is keeping secrets from her that could be the death of them all. 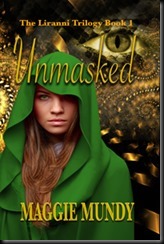 If most of the other Masks were like Alenze, then she was never going to fit in. He didn't have a hair out of place. His clothes were grey but of the highest quality, with a beautifully fitted long tunic and breeches and well-made knee-high leather boots.

"During the travelling, you'll be placed in a trance. This is done so you're not alarmed by the experience. I'll be in control, and you'll not be aware of what's happening around you."

He spoke to her as if she were a child. The fact he was at least a head taller than her didn't help matters as he peered down.

"I assure you growing up here has made me resilient." Daria crossed her fingers behind her back at the lie.

"Many people struggle with the experience. I myself was glad I wore brown britches the first time. I agree though. I sense you'll not be alarmed easily," Alenze replied.

For a second Daria saw a smirk on his face. He had a sense of humor, who would have thought. He even almost looked handsome when he smiled.

"Traveler Quatrome, the sun is setting," her father interrupted. "The Chamber is ready." He bowed his head to both of them.

Alenze offered his arm to escort her into the Travelling Chamber. Daria stared at his hand as her heart pounded in fear, but knew she had no choice but to eventually take it. Pell stopped outside the Chamber and smiled at her, then looked to Alenze.

"Take care of her, and warn your fellow Masks to watch out for her temper; she didn't inherit her mother's green eyes and red hair without reason," Pell warned.

"You have my word, Master Gallo," Alenze replied as he shook her father's hand.

Atia and Chelle hugged her with tears streaming down all their faces.

"It won't be long, and I'll be back, especially if they don't want me, which is highly likely," Daria soothed them as she tried to get her tears under control.

Alenze coughed and Daria couldn't delay any more. Again, his arm was offered and this time she accepted. He escorted her into the chamber and as the doors shut behind them, she could hear Rumus howling and her breath caught in her throat.

Alenze let go of her arm and walked into the center of the circular, windowless room. With the doors closed, there was an oppressive feel to the space, with the only illumination coming from the oil lamps placed about the walls. The floor was covered with a beautiful painting. The tales were that the settlement had been built around this place.

Alenze was studying the markings on the floor. Daria's breath was catching in her throat and the room was getting smaller. She couldn't go through with this, they couldn't make her go. Her chest was getting tight as her panic increased. She ran to the door of the chamber and raised her fists, thumping hard again and again. The yells coming from her throat blanked out the pain as her fists started to redden and bleed.

A hand touched her shoulder, causing her to spin around screaming, her clenched fist aimed at Alenze. Placing his hand over hers, he brought her fist down. He stared intently at her with his dark grey eyes as he spoke.

"When I went to the Domain in Denarius, I believed no one would want someone like me. Those who came with me at that time were filled with a confidence I never had. I didn't feel I'd ever belong, but now I do. Becoming a Mask has given my life meaning beyond what I would ever have thought possible. I've grown to love what I've become. You must trust me, and believe you'll feel that, too." He paused. "Are you ready?"

Daria nodded as he let go of her hands and walked over and stood over the open mouth of the winged serpent painted on the floor. She stood on the outside of the circular floor painting and thought her eyes must be playing tricks on her. The painting was starting to move as the serpent's coils began to entwine one upon another hypnotically.

"We can delay no longer. Stand on the mark of the moon." Holding out his arm, Alenze beckoned her to move forward.

She took the step, her breath coming in gasps. The outer circle had symbols of the sun, moon, stars and the Goddess Ikrar. The Goddess stood with her hands clasped around a crystal.

Alenze removed a small, plain brown mask from a pouch hanging around his neck and put it on his face. It had no hooks or fastenings, but melded to him on contact.

Daria stepped forward onto the moving picture. Alenze took her hands in a firm grip, and needing something to hold onto, she gripped equally as hard around his wrists. She wondered if he could hear her heart beating. He should, as it felt as if it was going to explode through her chest.

"I don't want to do this. My life is here, Crane is here, I love him and I want to stay." Tears flowed down her face.

"Trust me, Daria, and you'll be safe," Alenze instructed.

"I don't want to trust you. I don't want to go and no one there will want me. They think I'm bringing doom with me because I touched the crystal," Daria sobbed, but Alenze wasn't listening anymore. His eyes were shut and he was chanting strange words over and over. There was a humming noise making her dizzy, and then something touched her foot. She jerked her knee up. Peering down, she let out a scream as the coils of the snake picture on the floor started slithering over her feet and around her ankles - where was the trance Alenze had promised? The Mask was no longer solid on his face; the flat surface was bubbling as though something was trying to erupt. Then the small heads of two snakes broke free from the surface and bit into his temples. If he felt any pain he didn't react.

More snakes oozed from the Mask until the whole of his head was a wriggling mass moving down his back and entwining around his arms. Two vipers separated from the others encircling his arms. The snakes stopped their movements at his wrists and raised their bodies up as though to get a good look at her. They swayed hypnotically. Daria tried to pull free of Alenze's grip, but he was too strong. Then without warning, both snakes struck at her wrists in unison.

"Alenze," his name burst from her mouth as the pain hit her arms and the poison burned into her. His eyes opened, looking first to her face and then at the vipers injecting their venom. She could hear his thoughts. 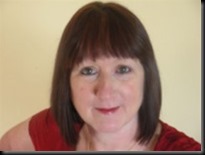 I live in Adelaide, Australia with my husband, one cat, two dogs and a snake. I have a motorbike that I would like to ride more than I do and I love walking at the beach and listening to the waves. I've always loved reading all forms of fiction from high fantasy and paranormal to contemporary and decided the stories in my head needed to be written down. It was either that or start on medication. Unlike many, I didn’t know I wanted to be a writer until a few years back. I started off doing a degree in drama but soon realized my love was in writing, though there is a play lurking somewhere on my computer. My day job is as a nurse in the operating room. I believe romance can be fun to read and write but it’s exciting to spice it up with the uncertainty that comes with suspense where the rules can be broken.

Posted by Andrew Richardson at 21:02