Their Only Choice, Their Last Chance 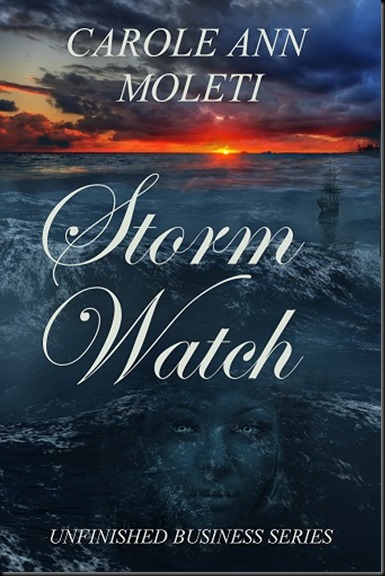 Mike and Liz thought they'd gotten control of the specters haunting the Barrett Inn. But things get very complicated when they're the ghosts from your past life. The Category Five Hurricane bearing down on Cape Cod appears to be headed directly for them--or has it been spawned from inside them? Knowing it’s their last chance to end the hauntings, Mike and Liz must decide whether to run or to defy evacuation orders. Will they survive the storm?

That’s the premise behind this new book by Carole Ann Moleti, the final part of the ‘Unfinished Business’ series. Having read ‘The Widow’s Walk’ and ‘Breakwater Beach’, I was delighted to be asked to preview ‘Storm Watch’ because it meant I got an early chance to find out what happened to the people who left a mark on me in the previous instalments.

The story is about how the characters and the ghosts inside them try to cope when a massive storm approaches and then hits their homes in Cape Cod. The novel has an excellent sense of location - I’ve never been to Cape Cod but came to feel I knew it well. I was so drawn in I started looking up maps and photographs, to find Moleti described everything so well the settings are just as I imagined them.
We’re not only dealing with the storm and ghosts, but multiple sub plots that are skillfully woven into the story and add interest rather than complexity. These plots drew me in because I wanted to know what would happen with each strand, until I was immersed in the whole book. I finished the novel well before I expected to because I kept wanting to read ‘just one more chapter’.

However, as so often with Moleti’s work, the real standout is the characters who are consistent and well drawn across the series’ three books. The author has a clear picture of what makes people tick and a knack for characterisation that many authors – including me – will envy. As with the series’ other books, the people in the story are largely ordinary, everyday folk on the surface, but each has depths and uniqueness that the writing brings out. It’s this depth that really had me rooting for everyone. I particularly liked the hermit, Harley, who is a new addition. His presence changes the dynamics a little from previous books which keeps the series fresh and the reader on his toes – and he’s great fun in his own right.

‘Storm Watch’ will be available on 19 July. Details are at: http://www.caroleannmoleti.com/the-unfinished-business-series/

The pre-order link for ‘Storm Watch’ is here.

Carole Ann Moleti lives and works as a nurse-midwife in New York City, thus explaining her fascination with all things paranormal, urban fantasy, and space opera. Her nonfiction focuses on health care, politics, and women's issues. But her first love is writing science fiction and fantasy because walking through walls is less painful than running into them.

The first book in Carole's Unfinished Business series, ‘The Widow's Walk’, was published in 2015.

The prequel, ‘Breakwater Beach’, appeared in 2016.

Carole also writes non fiction that ranges from sweet and sentimental in This Path and Thanksgiving to Christmas to edgy and irreverent in the Not Your Mother's Books: On Being a Mother and On Being a Parent.