I like writing historical fiction, although I often include fantasy/mythical elements.  ‘Andraste’s Blade’ and ‘The Doe and the Dragon’ are both set in Britain’s Celtic past.

So, someone asked a while ago, do I have any tips for writing historical fiction?

The answer is that I just get on with it, but I suppose there are some elements that help…

1.  Know the period.  ‘My’ time and place is the post-Roman Celtic British Isles (that’s a mouthful!) which I was fortunate enough to study for my degree.  That gave me a confidence that I would know the subject matter at least as well as most of my readers.  I once wrote a story set in the 19th century American west.  I thought the plot was fine, but it didn’t work because I couldn’t write about it with any confidence.

2.  Throw in some historical niceties.  Even if you’re not familiar with a period, a little knowledge can go a long way.  If people styled their hair in a certain way, for example, have a character arranging their hair like that.  If they believed in certain gods, have a character uttering a short prayer.  Have a character mention the king in passing.  A small amount of knowledge may fool a few people!

3.  Research!  The more the better.  Researching a novel should be fun.  If it isn’t fun, it probably means the story doesn’t match the novelist.  I can’t tell you how enjoyable I found researching the shape and size of 5th century north Welsh houses (yes, honest!).

4.  Be prepared to defend yourself.  In other words, know your facts before sending a manuscript to an editor or critique group.  I worked with one editor who queried every historical fact I’d put in a manuscript – I guess trying to make sure the document would stand up to scrutiny.  Fortunately, I could back up everything I wrote.  I think our working relationship would have been a tough one if I couldn’t. 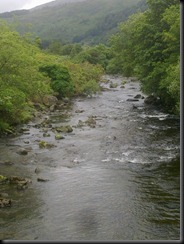 5.  Know the place as well as the time.  The same probably goes for most fiction set in the present day, too.  I set much of my historical fiction in north Wales.  It’s an area I know like the back of my hand, and I can’t walk along the River Glaslyn upstream from Beddgelert (where this picture was taken) without ‘seeing’ Breena and Prince Einion from ‘The Doe and the Dragon’ flirting on the bank.  That sort of local knowledge made the story so much easier (or should that be less difficult?!) to write.

6.  Don’t let the history get in the way of a good story.  In other words, don’t throw so much history at the reader that the plot gets muddled.  Historical fiction should only be set in the past, not swamped by it.

That’s about it.  Unless anyone can think of anything I’ve missed?

Posted by Andrew Richardson at 17:43