‘The Coterie-Declaration’, by Richard C. McClain

I’d like to welcome author Richard C. McClain to talk about his novel, ‘The Coterie-Declaration’, published by Rogue Phoenix Press.  During this book tour, Richard will give a way a digital book to one lucky commenter. 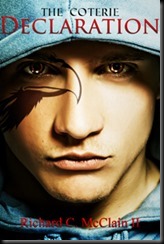 Dakarai Holt, sixteen, is sentenced to a rehabilitation facility. He unearths a conspiracy imposing mind control with ramifications affecting the U.S and the greater world.

Arrested for hacking, socially awkward and speech-impaired sixteen-year-old Dakarai Holt is sentenced to two years at Sheffield Academy, an exclusive juvenile rehabilitation facility. Within the first two hours, Dak is subjected to mandatory brainwashing. The academy’s enforcers, the R.A.T. SQUADS, patrol Sheffield to ensure each student's full compliance. Gacheru, Dak’s roommate, pressures him to drink a tonic that conspicuously counteracts Sheffield’s indoctrination. This places Dak in the middle of many adversarial and explosive situations. Additionally, Dak becomes knotted in a clandestine plot involving the Secretary of State and a mysterious group who goes by the name, The Coterie. While at Sheffield, Dak must find a way to survive the R.A.T. SQUADS’ terror, the annexation of a remote island, and battle his own inner demons.

The Coterie Declaration, by Richard McClain is a contemporary read about a Sixteen year old Dakarai Holt, who is arrested for hacking.  He’s socially awkward and speech-impaired, but he’s an awesome hacker.  When he is sentenced to two years at a Juvenile rehab, the story takes off with government brainwashing along with a plot to take over a remote island.  Dakarai however has found a way to thwart the brainwashing, but then he has a battle of his own against not only the rehab enforcers, but he has to fight in silence as well as try to overcome his own inner darkness.

This was a complicated, but highly enjoyable read.  From the first page the reader is dumped right into the action.  You sympathize with Dak as he struggles with his inability to speak and other emotional issues, compounded by his absent and uncaring father.  This book is full of suspense and action and moves along very quickly.  The wait for the next book in this series will be long for someone like me that wants to know what happens next.  Well done, Mr. McClain.  I highly recommend this book.

It is 04:22:31 on Saturday morning and I'm having trouble sleeping. I sit up and turn the light on to give life to the dark room. Instead of celebrating Gacheru's absences, allowing me space to live on my own and nurture my promise to abort ideas of relationships, worrying about him is all I seem to be doing.

A sound at the door steals my attention. I wait for Gacheru to enter but nothing happens. On the floor underneath the door, an envelope sticks halfway into the room. I pick it up and work my fingers underneath the sealed flap and run my fingers the entire length.

Please put the twenty-five billion back.

I sit on the bed as the weight of the words hits me. Nothing in the words themselves denotes any kind of emotion. Except for maybe the "please." Still, a cursory reading initiates a panic attack in my body. A brown bag sits on the floor. I roll off the bed, hitting the floor hard. I pull the bag to my face, scrunch my body to the fetal position, and rock and breathe…

Who sent me the note? I ask an hour later. As far as I know, the man who accosted me in the computer room and his superiors are the only ones aware of what they think is a hacking mistake. To apprise me of this kind of critical information now when I'm not under the influence would violate Sheffield's environment of covertness.

Revealing such knowledge to me makes no sense.

I read the letter again. The word "please" continues to stand out. Sheffield has not proved themselves friendly on the administrative, teacher, or security levels. Why now would they want me to "please" put the money back? They're the type that would hang me up by my thumbs and torture me to get the information. I exaggerate of course.

This message couldn't have come from them. Which begs the question, who sent me this note?

I sift through short list of names. Gacheru's is the only name on it. Somehow he found out I took it and wants me to return the money. He's the only one I know who's been able to bypass Sheffield's mind control and for whatever reasons considered it important that I not succumb to their brainwashing. Would Gacheru send a note? He could speak to me any time. It's not Gacheru. That leaves nobody.

I walk to the window. Darkness still pervades the night, fighting to maintain control. Daylight is hours away. Since the note can't be from Sheffield or Gacheru, I decide to get rid of the evidence. I rip the area of the paper around the sentence and then stick it in my mouth, chew it till it's soggy, and swallow it.

I lie back in bed when I remember the drinks in the closet. It takes a second to pry the board loose. There is nothing in the crevice apart from a thick envelope and three cans. On closer inspection, all are empty. I put the hollow cans back inside and replace the board. The contents of the envelope are none of my business. I'm not a spy. Gacheru helped me for a reason. To betray him this way reeks of self-interest, the worst kind of egotism.

Lightning strikes my mind. Three cans could only mean one thing. A third person has ingested the liquid and like Gacheru and me, this person is resistant to Sheffield's mind control.

Since Sheffield wouldn't ask me to put the money back except under mind control, and Gacheru could talk to me any time, the person who sent the letter has to be the person who drank the third drink.

Why should I put the money back, especially if we're seemingly on the same side? Wouldn't we have a better chance of stopping whatever it is they're doing and going to do by hitting them in the wallet?

It seems cut-and-dry to me.

While back on the bed sheet I rack my mind, wondering who this third person is. If Gacheru trusts this person, would he approve of the letter? He could have asked this person to send it to me. So why not introduce me? What's the reason for keeping this person's identity secret? As always, my mind considers the worst. If this is a ploy by Sheffield to test whether or not I am still subject to their mind control, seeking out this third person could be nothing more than a trap.

I know three cans means three people are outside the boundaries of brainwashing. I know the third can was unopened more than a week ago. I'm making an assumption here. If Gacheru kept all three cans, this third person ingested the drink after I consumed mine. He would not need to wait till I arrived to give the drink to this person, which means this third person is likely one of the seven people who traveled with me in the van. I'm sure I can nail it down even more. I know this person is aware of the twenty-five billion dollars I stole. By process of elimination it can only be one of three people, and two of them I'm responsible for bringing to Sheffield. Shipley and Jayden. Tasi is the only other person in the room with us when the hunt for the twenty-five-billion-dollar search took place. I can constrict it more. Since I'm in the men's dorm building, it can only be Shipley or Jayden.

The doorknob twists. My heart is catapulted into my throat. Is it the R.A.T. SQUADS coming to drag me away so I can be tortured? Is it Shipley or Jayden?

I hold my breath.

From the first page Richard McClain’s novel The Coterie Declaration the reader is thrust into Dakarai’s high anxiety speechless world. Darkarai’s complicated reality over flows with suspense, action, and danger. The entire novel moves at a thrilling neck breaking speed. When Dakarai’s magnanimous actions plunge him into a plea deal where he quickly finds out he is going to lose more than his freedom. Dakarai is a complex character that is fighting to not only survive the Sheffield Academy but also his every present anxiety. Sheffield Academy is a place where the rules on paper are not the rules that are followed. As the reader is drawn further and further into Dakarai’s world the characters that surround him become more shady and much more corrupt. While Dakarai does not speak with words McClain does a great job of creating intense scenes that allow Dakarai’s actions to speak for him.  Allowing the reader to explore Dakarai’s thoughts also gives the reader get a deeper understanding of the mute teenager. Even when The Coterie Declaration ends the reader know it’s not over.

Young Dak, the socially reclusive mute and estranged teenage son of a multi-billionaire tech magnate, is a gifted hacker who hacks into multi-national banks to steal and redistribute money to charitable intuitions and organizations; a somewhat modern-day Robin Hood.

Dak is caught by the conniving FBI agent, Yarbrough, who convinces Dak to plead and be sentenced to a so-called rich-kid reform school, Sheffield, where he soon becomes a pawn in a sinister plot to help a secret organization steal something from Easter Island. Along the way, only able to communicate with the aid of a whiteboard, Dak comes into connection with several characters including shady government officials, a couple attractive young girls that Dak becomes infatuated with, the so-called R.A.T SQUAD—Sheffield’s brutal young security force—and other student-inmates, all of whom have secrets and pieces of the puzzle Dak needs in order to figure out what is going on.

With Dak’s social awkwardness, his muteness, and inability to form friendships, Dak struggles to survive and obtain clues as to not only the fate of his roommate—the only one he really trusted who is found hanged in a tree—but to uncover this secrete Coterie and their plans.

The Coterie Declaration begins with the action-packed FBI pursuit of Dak after he attempts to hack into a major bank. The action and intrigue continues at a fast pace and the reader turns the pages in continued anticipation of what will happen next, or where it is that this story is going. The reader empathizes with the young Dak, estranged from his wealthy father, and roots for him to not only survive, but to put a stop to the secret plans of the Coterie Declaration.

Richard C. McClain II, "The Storyteller"—an advocate of imagination and a deliverer of truth through creative writing. Born in Kansas City, Missouri, Richard is one of five children who was taught to dream and believe that anything is possible. This thought premise inspired Richard to pursue the creative arts, through music, theatre and writing. Richard later became a pastor where from the pulpit he used his story telling abilities to bring the word to life in the hearts of the congregation. Richard is the husband of Sharon, and father of Nicholas, Nicola, Nathan, Natalie, and Nadia. He has had the privilege of honing his storytelling craft and understands the balance between imagination, fantasy, and real life.

"Consider this, before the story is ever heard, it is active, pulsating, and full of passion. It needs but the storyteller to tell it." 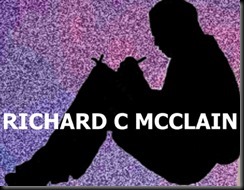 Posted by Andrew Richardson at 16:27