I’m delighted to announce a novel acceptance.  ‘The Fairy Wife’ is a retelling of a traditional Welsh story about a mortal who marries a fairy, and the trials and tribulations they have to endure.  It’s a story I thoroughly enjoyed writing and I’m delighted to be with the publisher.

The story is very much a historical fantasy, and I see it as a sister to ‘The Footholder’s Tale’ which Rebel ePublishers unleashed in 2015.  ‘The Fairy Wife’, like ‘Footy’, is set amid north-west Wales’ stunning scenery (‘Fairy Wife’ just beyond the lake in the picture below, ‘Footy’ in the valley just off screen to the left) and takes place in a mythical time in Wales’ past. 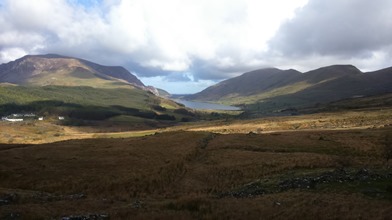 The original isn’t set in any particular period, so I decided to place it in 547AD so I could include legends relating to Maelgwn Gwynedd, a colourful king of north Wales who died in that year.  That’s the time and place I studied for my degree, which brought back some happy memories while I was writing.  The background knowledge was also a good basis for research.

I’m not overkeen on the title but I couldn’t think of anything better.  Hopefully before publication someone will come up with something better.

As always I’ll refrain from naming the publisher until contracts are signed just in case anything goes wrong, but it’s a house I’ve worked with before and who I’m delighted to be published by again.  ‘The Fairy Wife’ is likely to be released in 2018.

Many thanks as usual to those who commented on early drafts, particularly Phil and Carole.  Particular thanks to my wife for accompanying me on rugged walks over spectacular countryside while I researched locations.

Posted by Andrew Richardson at 18:20