I’d like to welcome author Elliott Capon to talk about his book, ‘Damn the Torn Speedos, Full Speed Ahead’, published by Rogue Phoenix Press.  During this book tour, Elliott will give a way a digital copy of ‘Meanwhile Back at the Ranch’ to one lucky commenter. 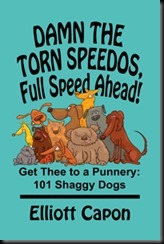 This is a fun book for everyone—especially if you love word play and the nuances of the English language!

Included in the 101 Shaggy Dogs are topics from dictators to dentures to small towns to colonialism and humanitarianism. Each of the 101 stand-alone 1000 word stories (all finely crafted, I might add) end with a word play phrase. I hesitate to give much away, but here is a fine example…

A man named Myron had been born without teeth. His loving wife had chewed his food for him all the years they had been married. Myron won the lottery—and bought himself some dentures. He waited for the right moment to surprise his wife. While she was in the restroom, he inserted his new dentures and sat quietly at the dinner table. She returned and cut a piece of peach cobbler – and prepared to chew it for him. He stopped her hand, crying out,

Priceless—and there are 100 more stories to read!

A “shaggy dog” is a story of less than 1000 words that ends on a groan-inducing pun. Here we have 101 of the groaniest.

What happens when a guy accused of stealing a type of onion defends himself by saying, “I was only taking a leek”? Or at the insect Olympics, where certain bugs hold the stopwatches, because “flies time”? That’s when you’re in the world of the “shaggy dog,” a type of story that ends on a funny, if horrible, pun that leaves the reader moaning and groaning...but laughing and eager to be abused by the next distortion of the English language. We have 101 such crimes against the mother tongue in this amusing collection.

Sy Donovan was the biggest man at American International Relief Services ("AIRS" to English speakers; just "RELIEF" to the rest of the world). It wasn't that Sy was a top executive: he was the biggest man in the organization because he was six-five and weighed two hundred and ninety pounds.

RELIEF was a group much like CARE or the Red Cross, which responded to disasters all over the world: floods, famines, fires, plagues, the aftermath of war. RELIEF workers would, pushing aside bureaucrats and the obstructive complaints of tinhorn dictators, literally invade an area in need and set to work. RELIEF had doctors, nurses, engineers, epidemiologists, nutritionists, psychologists, and caring professionals in dozens of other professions, all of whom would, at a moment's notice, drop their regular practices and lives in order to fly halfway or all the way around the world to come to the aid of people who needed help.

Sy Donovan was RELIEF's most active field administrator. He had a working knowledge of medicine, logistics, and most of the other skills possessed by the RELIEF volunteers, but his job was to see that things got done. He was usually on the first plane or helicopter to reach the disaster area, he decided where the medical tents would go up, where the portable latrines would be placed (don't laugh), who would look after the children. With his imposing size and full head of bushy gray hair and Linolnesque beard to match—and blessed with the personality of the offspring of Alexander the Great and a lioness—Sy Donovan backed down from no one. People who "didn't want to" or "couldn't do" something to help, when confronted by the formidable giant, found themselves suddenly very willing and able. Sy Donovan had saved more lives than penicillin.

After a drought of several years, the tiny African nation of Tomalaland was hit by weeks of ferocious rains. The ground had dried to the consistency of concrete and therefore could not absorb the water; flooding was of almost Biblical proportions. Entire towns had been buried under a combination of water, mud, and uprooted trees; two million people found themselves homeless, foodless, clothesless, medicineless, hopeless. The day after the rains stopped, RELIEF got to work. A huge plane was quickly loaded with all the supplies to sustain at least a few thousand people for a few days. Other planes, trucks, and ships were to following within the next few days, but one plane had to get there first. Sy Donovan was, of course, aboard this plane.

In what had once been the capital of Guaziville, and which was now a sea of muck and debris, five thousand weary people made their way to the remains of the airport to await this lifebringing plane. The airport's single working radio was in contact with the plane, and the soldiers nursing the radio had found enough dry wire and undamaged equipment left over to hook the radio up to loudspeakers so that everyone present could share the joyful anticipation of the arrival of their saviors.

Unfortunately, the storms were not quite finished; when the plane was still an hour out of Guaziville, the pilot radioed—and five thousand people heard—that the plane had been struck by lightning. Two of their four engines were dead; a third was laboring. He was losing altitude, struggling to get to the airport.

Five thousand people prayed: to the gods of Islam and Christianity and to smaller, lesser-known, older tribal deities. The pilot reported that he was skimming the treetops, hoping to get as close to the airport as possible before the plane with its food, medicine, clean water and warm blankets finally hit the ground. The five thousand people at the airport were praying aloud now, crying out to the various parts of Heaven for assistance, for a miracle.

Then, in the distance—a speck! It was a plane—the RELIEF plane! Smoke poured from three of the four propellers. The sound that reached ten thousand ears was of a sputtering and choking. The plane dipped and bounced and rose and fell as if it were riding over invisible speed bumps. The people at the airport prayed like they had never prayed before.

Incredibly, the plane kept coming closer. A few people dared hope it would make it all the way to the runway. Then…closer…closer…closer… Hope was reborn! A few more feet…a few more seconds…! Come on…come on…yes…yes, yes….??

YES! The plane touched down on the holed, muddy runway just as the fourth engine exploded with a tired-sounding whuff! and the propeller stopped turning.

Five thousand people breathed out all at once, each silently thanking their God or gods. The miracle had happened. The plane had landed safely.

A few seconds later, a door on the side crashed open, and from the plane itself emerged a big Sy of RELIEF.

Elliott Capon has three novels in print: the thoughtful horror story The Prince of Horror, and two funny whodunits that take place in the world of Poverty-Row Hollywood of the 1930s, The Corps Vanishes and Meanwhile, Back at the Ranch, the latter two published by Rogue Phoenix Press. He has had stories (and reprints!) in Alfred Hitchcock’s Mystery Magazine, Frostfire Worlds, Disturbed Digest, and the original-story anthologies Zippered Flesh and Uncommon Assassins. He lives with his current wife and as-yet undisowned son.

Posted by Andrew Richardson at 16:48